Nakamba On List Of Players Villa Fans Want Out 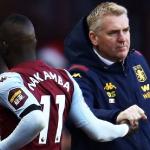 Marvelous Nakamba‘s name has repeatedly appeared on fans’ list of players they want to be loaned or totally pushed out of the club.

The talk is being triggered by the departure of Dean Smith who is joining struggling Norwich City. Some believe he will take some Villa players with him.

The Zimbabwean international, who is currently with the Warriors for World Cup 2022 qualifier matches, is one of the players that have been suggested for a loan move.

If Deano goes to Norwich, who does he realistically take with him on loan?

Another supporter said Dean Smith would sign every player he signed if he is given a chance.

In a related tweet, Matthew AVFC 1874 @Matt42417739 also named Nakamba among the players that should be offloaded. Read the tweet:

Players I’d like us to shift in Jan; Sanson Nakamba Mings (If we can bring in a top CB) #AVFC.

Genuine question… if Smith goes to Norwich, do we think he’s gonna try and sign anyone from Villa? If so who… #AVFC #DeanSmith #NorwichCity

In response, a supporter using a Twitter handle, The Stands Of Villa Park@TheStandsOfVP, said:

Meanwhile, some named Nakamba on the list of players who will likely make it into new coach Steven Gerrard’s first and regular XI. Others are Martinez, Cash Konsa, Mings, Targett, McGinn, Luiz, Bailey, Ings and Watkins

Nakamba arrived at Villa Park in the summer of 2019 from Belgian club Club Brugge.

The Zimbabwean gradually established himself in coach Dean Smith’s plans and made himself a big fans’ favourite, particularly before football was suspended following the outbreak of the coronavirus.

He has struggled to replicate his form after the COVID-19-induced break, a development that coincided with the rise of Douglas Luiz who also plays in the middle of the park.

Nakamba has this season featured in very few games as the coach chose Luiz ahead of him.

Over the past two years, some English clubs including Everton, Tottenham, Crystal Palace and recently Newcastle have reportedly been interested in signing Nakamba.

Early last year, Marvelous Nakamba was linked with a move to Turkish Super Lig club Trabzonspor and he said he would like to stay in England.

Norwich can b relegated ,he should go to Newcastle ,they have wanted him for a long time

Newcastle chero ikadonha baba it's definitely going to be promoted again... For me that's a good move