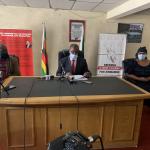 The MDC-T says it has lost patience with MDC Alliance legislators and councillors who have refused to dump Nelson Chamisa in favour of party leader Douglas Mwonzora.

MDC-T national chairperson Morgen Komichi told the Daily News on Wednesday that they have already compiled the final list of the legislators and councillors who are going to be recalled. Said Komichi:

We have already compiled the final list of the people who are going to be recalled. We are ready to dispatch it to Parliament and the Local Government minister any time from now

They are not contributing to the party policies, not attending our parliamentary caucuses and they are also absconding from strategic meetings that give direction to our debates in Parliament because they are taking instructions from elsewhere.

Right now, we would want our MPs to debate the national budget in accordance with the party’s directive, so we will not allow our contributions to be distorted.

We are, therefore, going to ensure that they don’t continue to be more of a hindrance than help hence the impending recalls.

Komichi refused to disclose the names of those who are set to be recalled but it is understood that about ten MDC Alliance MPs will be axed.

Sikhala and Molokele told Daily News that Mwonzora has not approached them clandestinely, as both MPs vowed they will support Chamisa no matter what.

I am of the opinion that its better to be a puppet in your own country among your country citizens that to be a puppet of westerners (former colonizers),as Zimbabweans we must learn to solve our political differences amicably not insulting each other,that proves to be political immature.

I am of the opinion that its better to be a puppet in your own country among your country citizens that to be a puppet of westerners (former colonizers),as Zimbabweans we must learn to solve our political differences amicably not insulting each other,that proves to be political immature.

Monzora is a Zanu Pf puppet, closely working with the ruling party to dismantle the our MDC Chamisa. His doors will be shut soon

ALL GUYS IN MDC T NOW KNOW THAT THEY ARE SPENT FORCES. MDC T IS CLEARLY A ZANU PF PROJECT. ALL MPS WHO DEFECTED FROM MDC ALLIANCE TO JOIN MUST KNOW THAT THEY ARE IN PARLIAMENT FOR THE LAST TIME BECAUSE NOONE WILL VOTE FOR THEM IN THE NEXT GENERAL ELECTIONS.

MUKOMANA MUST INTENSIFY HIS RURAL VISITS AND DRUM UP SUPPORT. THE BIGGEST RIGGING THAT ZANU PF WAS DOING ALL ALONG WAS DENYING OTHER POLITICAL PARTIES A CHANCE TO CAMPAIGN IN RURAL AREAS.

I AM TOLD THAT [ MUKOMANA ] BEEN WELL RECEIVED IN MASVINGO, MANICALAND AND HURUNGWE. GO [ MUKOMANA ] GO. HAPANA CHOKUMIRIRA.

Condom Mwonzora🤭Comrade Mwonzora, whatever you must do do it quickly.Judas was told the same words the night he betrayed his Lord and Friend. We eagerly wait for the consequences. Why are you now hesitant? Faster faster complete your recalling process. You don't need to be patient with anyone. Empty parliament of representatives chosen by the people. But remember that condoms are known to burst at times.

Varume,ndinemubvunzo,POLAD ichiri here?Mr Komichi remember your days are now numbered. Elections are around the corner and you are busy agitating Recalls,which are no longer effective at this juncture. Only the time will tell,hameno

He wants to please his master,Zanu pf,that he is delivering on the promises in respect to the allocation of Political Parties Act and other benefits inorder for him to remain afloat in the eyes of his bosses but dzoro rake nzondora rotaridza kuti ririkufufutirwa netsvina.

Yu are now talking. He is undermining the people of Zimbabwe nt ccc. Let's wake up and cause him into exile