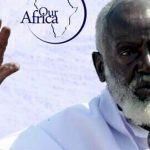 Some members of the African Apostolic Church attending the church’s annual pilgrimage have spoken about the untold frustration they endured on the way to Mapembe Shrine in Odzi near Mutare.

This happened as the battle to control the Archbishop Paul Mwazha-led church rages on.

The annual pilgrimage, which was held simultaneously with Mwazha’s 103rd birthday celebrations, drew more than 10 000 congregants.

The three-day event started last week on Thursday and ended on Saturday.

Motorists driving to Mapembe Shrine were selectively stopped, thoroughly searched, and others spent the night at traffic check points after a fallout with law enforcement agents.

Congregants who attended the pilgrimage told The Manica Post that they went through countless incidences of interrogations, accusations and frustration, especially at police roadblocks.

Joshua Daka, who drove all the way from Karoi for the Mapembe Shrine pilgrimage, said:

We endured a difficult time on our way. It was really sad to see some traffic officers frustrating us as if they were clearly under instructions to do so.

As we drove from Karoi, our worst experience was in Macheke where we were harassed at two roadblocks.

Chengetai Sithole, who drove with his family from Mt Darwin, said:

I also encountered problems in Macheke. We literally slept at the Macheke roadblock. It was a nasty experience that we least expected.

What surprised us was that the officers were accusing us of being ‘tsindondi’ and telling us not to trouble ourselves since we do not have many people behind us.

They actually spoke with authority on internal matters of our church.

“Tsindondi” is a term used in the African Apostolic Church to refer to those who subscribe to prayers in the mountains.

It is difficult to comment on that because it depends on whether they (congregants) lodged formal complaints, when and at which police station.

That is the only way we can ascertain the genuineness of their plight and take appropriate action.

Meanwhile, one of Mwazha’s sons, Alfred Kushamisa declared himself the archbishop and successor to his aged father.

However, in October the Supreme Court upheld part of a High Court ruling on the succession dispute in the AAC nullifying the appointment of Kushamisa as successor to his father.