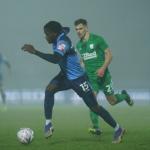 Luton Town forward Admiral Muskwe says it is an honour for him and his family to represent Zimbabwe at the Africa Cup of Nations (AFCON) tournament.

Zimbabwe is among the 24 African countries that qualified for the 2021 AFCON finals being hosted by Cameroon from 9 January to 6 February 2022. The Warriors are in Group B alongside Senegal, Guinea and Malawi.

Muskwa, who was born in Harare, before moving to England as a three-year-old, scored for Zimbabwe once in a World Cup qualifier against Somalia in September 2019.

Speaking ahead of the flight to Cameroon for the AFCON tournament, the 23-year-old said he is eagerly looking forward to playing at the continent’s biggest football tournament. He said:

I’m very excited, it’s a huge honour for myself and my family and I’m looking forward to the whole experience.

I’ve played a few games in the past, but when the whole world kind of stopped, I guess international football came to a stop, so this will be my first time playing for them in about two years, so I’m really looking forward to it.

As a young boy, you always dream about playing in a major tournament, playing for your country is a huge honour, especially being able to do it at such a prestigious tournament like the Africa Cup of Nations.

It’s something which I’ve always wanted to do it and now I’m going to get the opportunity to do so.

As a player it’s an amazing honour, I wouldn’t want to talk about what other people have to say about the competition, but personally, what I stand by, is every major tournament in football is a huge honour, they’re all on a par with each other.

Muskwe turned out for England during his younger days, representing them at U16s and U17s levels.

Muskwe featured in the 2014 Nordic U17 Football Championship, scoring once in the 5-1 win over Finland, as the Three Lions finished fourth. Added Muskwe:

I played England U16s and U17s, which was a huge honour as well, a great privilege for me and my family.

Then I think when I was 18, 19, Zimbabwe called, so it was a decision I had to make and I think just playing for the motherland, I’ve always had it in the back of my mind.

I’m very honoured to be playing for my country, so literally, when they called me up the first time, it was a no-brainer for me really.