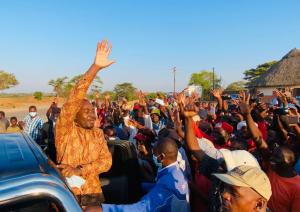 He told ZimLive.com that corruption has destroyed the country and threatening people for supporting the opposition won’t work anymore. Said Makhalima:

It’s not about politics, it’s love for change and a better Zimbabwe. I’m for change in Zimbabwe and I join those saying ‘ngaapinde hake mukomana’ (let the young man take over).

You don’t have to be Chamisa’s supporter to know that corruption is destroying the country and to call for change or a better Zimbabwe.

The days of threatening or condemning people for supporting the opposition are gone.

In Zimbabwe, artistes avoid publicly criticising the ruling ZANU PF for fear of being victimised.

Apart from a few musicians such as Thomas Mapfumo, now living in the United States, the majority of artistes choose to “see no evil, hear no, evil speak no evil” as far as politics is concerned.

Anyone who's brain functions normally would never support Zanu Pf. Unless they're directly benefiting financially or they just don't know anything about how an economy is run

Zanu will rule for ever and ever #ED for life

Yes love Zanu Of but we are going to the dogs if not we are already there.

Wake up from your dream...

Your dream will not happen

Majority of the populace want the same but fear of victimization and retribution reverses the wave. Politics in Zimbabwe has been made toxic instead of being a pool of ideas and ideologies. I remember umdala wethu's words,"...... politics should be an interesting subject of purpose and servitude not beating one another. Why should you rova one another?"
This was one caliber of a politician who used reason and not treason to articulate politics to the masses. Lala ngokuthula umdala wethu.

The late great VP and national hero, Joshua Nkomo. I even have the video when he said it

Report Abuse
Who? 4 months ago