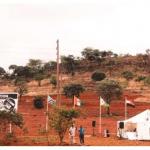 ZANU PF’s Zvimba South legislator and businessman Philip Chiyangwa is challenging the compulsory acquisition of his land in Warren Park, Harare, where the State wants to set up a museum for African liberation.

This is contained in a High Court chamber application where Chiyangwa is challenging the seizure of the land, which measures about 5.5 hectares.

Chiyangwa, the executive chairman of Kilima Investments, the company that owns the property, is accusing the government of pulling out of talks to buy the land, opting instead to grab it and wants the court to issue an order declaring the attempt null and void, unconstitutional and having no justification in an “open and democratic society”.

The land in contention is Stand 9297 Warren Park Township of Warren Park where the government is setting up a museum to chronicle Africa’s liberation.

Chiyangwa said in his founding affidavit filed on November 12 through his lawyers Mutamangira and Associates:

The respondents’ conduct is wholly arbitrary, unconstitutional and has no place for justification in an open and democratic society.

Lands and Agriculture minister, Anxious Masuka, who is cited as the respondent, said in the Government Gazette that he was compulsorily acquiring the land on behalf of the President.

Chiyangwa said he was given the land by Harare City Council as restitution for properties the city had grabbed from him. The settlements were agreed upon and registered before the High Court in 2015.

The businessman planned to construct a world-class shopping complex at the site, which he says will include supermarkets, a fuel service station, clothing shops and all types of complementary infrastructure.

The matter is yet to be heard while Masuka is still to file opposing papers.

That place was compulsorily acquired by the Gvt.