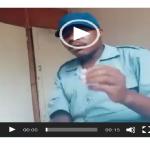 A police officer who appeared in a viral video while dressed in Police uniform, holding a swipe card, while displaying local currency notes and lip-syncing to the lyrics of the song “Munyu Hauchavavi” by Blessing Shumba, has been ordered to pay a ZWL$300 fine, according to the Zimbabwe Human Rights NGO Forum (the Forum).

“Munyu Hauchavavi” is a ChiShona phrase that means “salt has lost its taste” and the police officer was apparently mocking the paltry salaries earned by Government employees in Zimbabwe.

In a post on their Twitter page, the Zimbabwe Human Rights NGO Forum, said they will appeal the judgement. The Forum said:

Munyu Hauchavava cop to spend 5 days in detention and pay a ZWL300 fine after he was convicted of posting Whatsapp statuses that could force the public to identify him as a member of an opposition party. ZimHRNGOForum to appeal the judgement.

Sections 5, 7, 35, 42 and 48 of the 29th and 34th Schedules of the 2003 Police Act criminalise the spreading of reports that cause alarm and despondency, insubordination and or taking an active role in politics by either speaking at political functions, wearing branded clothing and chanting slogans.

On 3 October this year, the Officer Commanding Mt Darwin District sent a memorandum to all officers-in-charge of stations in the district, raising the issue of misuse of social media platforms by police officers. That was after the Munyu Hauchavavi video had gone viral. The memo read:

This Headquarters has noted with concern the proliferation of photos and videos on social media platforms where police officers are openly seen denigrating the Government, uttering political statements and improperly dressed with some female officers posting sexually seductive photos and videos in full Zimbabwe Republic Police uniform .

This conduct is tarnishing the Zimbabwe Republic Police’s image and is contrary to the dictates of the disciplinary code as espoused in the Police Act, Chapter 11:10.

Commanders are implored to immediately identify such members and take decisive action which includes disciplinary trials and boards of inquiry (suitability).

The current trending video on the social media where two members are seen openly dressed in Police uniform, holding a swipe card, while displaying local currency notes and lip syncing to the lyrics of the song Munyu Hauchavavi (Salt) by Blessing Shumba, is a case in point.

Commanders are to acknowledge receipt of this important memorandum by 0800 hours today 04/10/21.