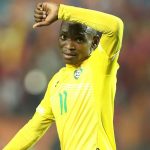 Responding to Billiat’s post on Twitter, the Wigan Athletic defender hailed his compatriot as one of the best. Said Darikwa:

One of the best I’ve shared a football pitch with. Well done on achieving a dream, my brother.

Also responding to Billiat’s tweet, Mudimu said it is an honour to have played in the same team Khama Billiat. He wrote:

What an honour to share a pitch with you.

Billiat announced his retirement on Monday through a statement he posted on his social media platforms.

The 32-year-old said he made the decision to pave way for the new generation.

The Warriors failed to win a single match after losing to all their opponents, Ghana (twice), South Africa (once) and Ethiopia (once), and drawing the other two games.

With the dismal performance of our team it's Noble for all senior players above 30 to quit. This crop of players had broken all records for the wrong reasons, fare thee well Khamaldhino

From the last remark of this report, is it that karma might have been disheartened by the performance of his home squad that caused him to retire from the international football? The decision he has made it sounds like it has got so much thoughts on it, i don't get what it is exactly but to me it is a good call... Welldone buddy you are such an inspiration to the future generation, #BRAVO
#THUMBS UP
#GRASIUS AMIGO