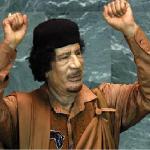 The son of Libya’s late former president, Muammar Gaddafi, has registered his interest to run for that country’s presidency in a December vote.

Saif al-Islam al-Gaddafi, 49, appeared in an electoral commission video signing documents at the election centre in the southern town of Sebha.

Gaddafi is one of the most prominent – and controversial – figures expected to run for president, a list that also includes eastern military commander Khalifa Haftar, Prime Minister Abdulhamid al-Dbeibah and parliament speaker Aguila Saleh.

However, while his name is one of the best known in Libya, and though he once played a major role in shaping policy before the 2011 NATO-backed uprising that destroyed his family’s regime, he has barely been seen for a decade.

The era before the 2011 NATO-backed uprising that swept Col Muammar Gadaffi from power was characterised by autocracy and a stable economy, therefore, the electorate might be divided.

Saif al-Islam was tried in absentia in 2015 by a Tripoli court which sentenced him to death for war crimes including killing protesters during the 2011 revolt.

He would likely face arrest or other dangers if he appeared publicly in the capital Tripoli. He is also wanted by the International Criminal Court.

Educated at the London School of Economics and a fluent English speaker, Saif al-Islam was once seen by many governments as the acceptable, Western-friendly face of Libya, and a possible heir apparent.

But when a rebellion broke out in 2011 against Muammar Gaddafi’s long rule, Saif al-Islam immediately chose family and clan loyalties over his many friendships in the West.

Your vote is the key . wether you like him or not your VOTE speaks

US$0 Harare
Tupac shakur 6 months ago

He gonna win in these elections

Sure Lovemore you can say that again 💪💪🤩