Mthuli Sets Aside $11 Billion For Elections 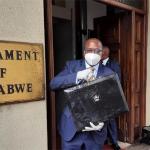 The Ministry of Finance has allocated $11 billion to the Zimbabwe Electoral Commission (ZEC) to fulfil its mandate that includes conducting voter registration and conducting by-elections.

ZEC will hold by-elections during the first quarter of 2022 to replace dozens of MDC Alliance legislators and scores of councillors who were recalled by the MDC-T and to fill seats left vacant through death.

A total of $7.75 billion was allocated for preparatory works for the 2023 elections while $3.25 billion was for holding of by-elections next year.

The country will be holding General Elections in 2023 as enshrined in the Constitution and preparatory works (delimitation, voter registration and inspection) will be undertaken to ensure the success of this constitutional requirement.

The 2022 National Budget is, therefore, setting aside $7.75 billion for the respective preparatory works.

Additionally, Government is also allocating $3 25 billion for the holding of by-elections for vacant constituencies in 2022.

Ncube also allocated over $4 billion to other so-called independent commissions to undertake their constitutional mandates.

The Zimbabwe Human Rights Commission (ZHRC) received $403.9 million while the National Peace and Reconciliation Commission (NPRC) was given $441.3 million.

Government is capacitating institutions of governance such as the Zimbabwe Anti-Corruption Commission, National Peace and Reconciliation Commission, Judicial Service Commission and others to execute their mandate including decentralising services to local levels.

To date, all Commissions have been capacitated with tools of trade such as vehicles, furniture and equipment, with ZACC, Zimbabwe Media Commission and Zimbabwe Gender Commission, having been provided with office space for their head offices.

The 2022 National Budget allocates resources for further capacitation of all Commissions to undertake their constitutional obligations.

THE ISSUE OF BY-ELECTIONS AND HARMONISED ELECTIONS IS A THORNY ISSUE IN OTHER PARTIES FLESH. SOME POLITICAL PARTIES HAVE NOTHING TO DO WITH ELECTIONS, BUT HAVE MORE TO DO WITH ATTENDING POLAD WHERE THEY ARE MILKING CITIZENS BY ACCEPTING GOOD CARS FROM GOVERNMENT AND SLEEPING IN FIVE STAR HOTELS IN THE COUNTRY.

CAMARADA MWONZORA IS SAID TO HAVE ATTENDED A PRIVATE AND ONE ON ONE MEETING WITH PRESIDENT ED MNANGAGWA WHERE HE PERSUADED HONOURABLE PRESIDENT ED MNANGAGWA TO DUMP BY-ELECTIONS AND HARMONISED ELECTIONS FOR A GOVERNMENT OF NATIONAL UNITY. HIS REASONS ARE WELL KNOWN. HE WILL NOT WIN EVEN A SINGLE SEAT IN THE BYELECTIONS. PRESIDENT MNANGAGWA DID NOT BUY THAT IDEA AND ANNOUNCED THAT THE BY-ELECTIONS SHALL BE HELD IN THE FIRST QUARTER OF 2022. THOSE IDEAS DID NOT SUPPORT HIS ENGEGEMENT AND REENGAGEMENT PROCESSES. MDC T SUMMERSAULTED AND SAID THEY WERE ALSO EAGER TO PARTICIPATE IN THE BY-ELECTIONS.

THE FACT THAT MINISTER OF FINANCE AND ECONOMIC DEVELOPMENT, PROFESSOR MTHULI NCUBE, HAS SET ASIDE 3.25 BILLION FOR BYELECTIONS MEANS THAT PRESIDENT ED MNANGAGWA IS COMMITTED TO GO FOR THE BYELECTIONS IN THE FIRST QUARTER OF 2021.

BYELECTIONS ARE GOING TO A BIG INDICATOR AS TO HOW THE HARMONISED ELECTIONS OF 2023 ARE GOING TO FAIR. TI IS EITHER ZANU PF IS GOING TO WOBBLE IN THEIR LONG TROUSERS AFTER LOSING MOST OF, IF NOT ALL CONSTITUENCIES, TO MDC ALLIANCE. SORRY, TO HAVE MENTIONED ONLY ZANU PF AND MDC ALLIANCE. IT IS BECAUSE THE REST ARE PSEUDO POLITICAL PARTIES. THEY WILL NOT WIN A SINGLE SEAT, BUT KILL BIG AT POLAD !!!!!

EVE THOUGH I WALK THROUGH THE DARKEST VALLEY, I WILL FEAR NO EVIL, FOR THOU ARE WITH ME. [PSALM 23:4]