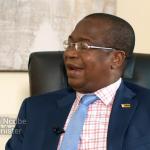 Finance and Economic Development Minister Mthuli Ncube has been accused of destroying a sacred site reserved for cultural ceremonies in his rural home in Matobo District, Matabeleland South province.

The area is located in Chap village, a few kilometres from Matopo National Park.

Villagers who spoke to Southern Eye said Ncube is building lodges on the site, thereby desecrating it.

A villager, Sithandazile Dube said local traditional leaders raised concern over Ncube’s project and appear to have been cowed into submission by the Government. Said Dube:

We tried to ask our leaders to stand up and fight for our heritage, but we yielded nothing.

When people raised concerns about Ncube’s project in that area, we were told that he was given permission by the government.

Mthuli was born and raised here; he is the same person who should be protecting our culture.

It is unfortunate that there is nothing we can do about it. We will just watch as they destroy our culture.

Our heritage is slowly vanishing, it can be this place today and tomorrow it will be somewhere else.

There used to be nice caves here called Bhabharadzi, where tourists used to come and visit, but now, even the road has been destroyed.

We are aware that the Finance minister is building lodges in Chap area near Whitewater village in Matobo, but I’m not sure if he was given permission to do so by the villagers.

We are not aware that the area is a sacred place that needs to be reserved for cultural heritage.

If the villagers are complaining, then the matter needs to be resolved.

Ncube’s spokesperson Clive Mphambela declined to comment on the matter saying it was personal. He said:

This is a personal issue that I would not like to talk about as I believe that Ncube is better placed to comment.

But, generally, the project commenced in 2015 with the permission of cultural leaders and the Road Trust.