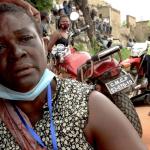 Three Zimbabweans are feared dead after they went missing in the war-ravaged Cabo Delgado region of Mozambique and the government is making trying to account for them.

An Islamic insurgency against the government of Mozambique started three years ago and has killed over 3 000 people and displaced hundreds of thousands.

Mrs Mariana Fransisco and her younger sister, Mrs Monica Louis, were captured by militants on March 27.

Their family is pleading with the Mozambique and Zimbabwe governments to facilitate their safe release.

A spokesperson for the Ministry of Foreign Affairs and International Trade, Mr Livit Mugejo, on Friday said Zimbabwe is beefing up efforts to locate the missing trio who vanished in March when insurgents attacked the town of Palma. Mugejo said:

Yes, l can confirm that three civilians have been missing in Cabo Delgado, Mozambique. Their relatives approached the Ministry for assistance last week. The Government is deeply worried that its citizens are missing. We are doing everything possible to locate the missing Zimbabweans.

He said the ongoing conflict in the area has made it difficult to locate the missing Zimbabweans.

Mugejo added that Zimbabwe is liaising with the Mozambican government through its Embassy in Maputo and the Embassy of Mozambique in Harare to make sure that the missing people are accounted for.

He urged all Zimbabweans based abroad to register with their nearest embassies to make it easier for the Government to trace and assist them in times of crisis.