MOTD Top 10: What has been your favourite Premier League managerial rivalry? 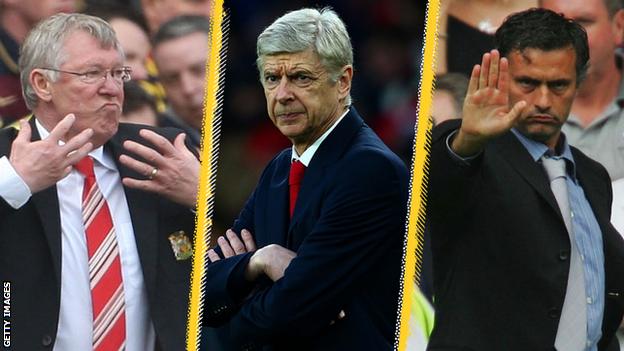 The Match of the Day Top 10 podcast is back... nearly.

Gary Lineker, Alan Shearer and Micah Richards will return in the spring with their latest series of the BBC Sounds hit, ranking their top 10s from an assortment of topics across the Premier League era.

But we're giving you an early chance to get involved, by letting you pick your top three for each of the upcoming shows, and the trio will get to see your choices before they record the pod.

It is not just on the pitch when things can get heated, and we have seen numerous controversial moments involving the managers on the touchline as well.

"There have been a few of these, haven't there?" said host Lineker. "Most of them involving the same people, but any excuse to talk about our experiences with various managers.

"Managers have always been hugely important and charismatic figures, from the days of Sir Matt Busby and Bill Shankly to the likes of Brian Clough and Terry Venables in my playing days.

"What we began to see in the 1990s onwards, though, was a more intense or even personal rivalry, which included them trying to wind each other up, like we famously saw with Sir Alex Ferguson and Kevin Keegan in 1996 when Manchester United and Newcastle were going head-to-head for the title.

"We saw the same with Ferguson and Rafael Benitez, and Ferguson with Arsene Wenger too. For a while it was always Ferguson - I wonder why that is! It's probably because he was around forever, and was so incredibly successful of course.

"Most of these rivalries are probably another product of the Premier League era, and the increased media attention that came with it. The cameras capture more of these moments and sometimes help to cause the confrontation that creates them.

"Sometimes it is deliberate, but if anyone says anything remotely antagonistic it is immediately thrown at a manager to respond, so these things escalate, and that is all part of the fun."

The original Premier League managerial rivalry. Manchester United, managed by Ferguson, won the title in both the first two years, narrowly seeing off a challenge from Blackburn Rovers in the second of those, 1993-94.

But Rovers, led by Dalglish, got their revenge a season later as they won the title on a dramatic final day despite losing at Liverpool while United, who would have become champions with a win, could only draw at West Ham.

The Ferguson-Dalglish rivalry then got reheated when Dalglish took charge for a second spell at Liverpool in 2011-12, a season in which Liverpool striker Luis Suarez received an eight-game ban for racially abusing United defender Patrice Evra.

The 1995-96 Premier League season was a classic as Newcastle, who at one stage held a 12-point lead at the top, were being chased down by Ferguson's Manchester United.

In comments made to the media, Ferguson suggested that Leeds and Nottingham Forest - two of Newcastle's final three opponents of the season - would not be trying as hard, in a not-so-subtle attempt to make life more difficult for Keegan's side.

Following a hard-fought 1-0 win at Leeds, Keegan, in one of the most memorable Premier League interviews, snapped, saying "he [Ferguson] went down in my estimation when he said that" and the memorable "love it" line. But it did not stop Manchester United from becoming champions, finishing four points ahead of Keegan's side.

Between 1996 and 2004, the Premier League title was won by either Arsenal or Manchester United every year - and things often got heated between Wenger and Ferguson.

There were frequent clashes between the pair as well as between the teams on and off the pitch, including a time after a match when Ferguson was hit by a piece of pizza thrown by Arsenal midfielder Cesc Fabregas.

"It was sometimes very aggressive, especially after the games. When you're fighting to win, you are two lions," said Wenger, while Ferguson said the relationship between the pair had been "toxic" at its worst.

In the mid 2000s, Bolton, with Allardyce's direct, physical style, proved a constant problem for Wenger's free-flowing Arsenal - and the two managers were often critical of each other.

In 2003, the Gunners, battling with Manchester United to win the Premier League, let a two-goal lead slip at Bolton in a 2-2 draw in April - a result which helped United become champions, with Wenger saying he was still hurt by the scoreline many years later.

Between September 2004 and February 2007, Arsenal only won one of their eight matches against Bolton, with Allardyce celebrating victory in four of those games.

"He takes it all very personally and has an air of arrogance," said Allardyce in his autobiography. "We'd really got to them and Arsene Wenger hated us. The more I could wind him up, the more I liked it."

There was no love lost when Chelsea boss Jose Mourinho and Arsenal's Arsene Wenger met on the touchline, or exchanged insults in news conferences.

A long-running feud started in 2005 with Wenger criticising Mourinho's negative tactics. Mourinho then called the Frenchman "a voyeur", to which Wenger responded by saying the Portuguese was "out of order, disconnected with reality and disrespectful".

The feud restarted when Mourinho returned to the Premier League with Chelsea in 2013 and a few months later he called Wenger "a specialist in failure". During a match at Stamford Bridge in 2014, the pair had to be separated, with Wenger shoving Mourinho on the touchline.

This rivalry started when Mourinho's Chelsea were up against Benitez's Liverpool, often in the latter stages of the Champions League, in the mid-2000s.

This included in 2005 when Liverpool reached the final at Chelsea's expense thanks to Luis Garcia's "ghost goal" as Mourinho called it, when, in the days before goalline technology, a dubious goal was given.

Like Wenger had done, Benitez criticised Mourinho's style of play and Mourinho did not shake Benitez's hand after a match in 2006. In 2007, Benitez mocked Mourinho's self-titled 'Special One' tag, by saying: "We have our special ones here - they are our fans."

This one started when Benitez was at Liverpool and then carried on when the Spaniard took over at Chelsea.

But this rivalry led to a bizarre news conference in January 2009 when Benitez, whose Liverpool side were top at the time, produced a piece of paper and read out a list of "facts" of how Manchester United and Ferguson were trying to influence referees and the football authorities.

"The mistake he made was to turn our rivalry personal," wrote Ferguson in his autobiography. "Once you made it personal, you had no chance, because I could wait. I had success on my side."

This one goes back to 2010, when then Fulham boss Mark Hughes refused to shake Stoke manager Tony Pulis' hand after a League Cup tie, with Pulis doing likewise a few months later.

It carried on in 2017, with Hughes now at Stoke and Pulis at West Brom, with more handshake refusals. "He doesn't like shaking hands," said Hughes afterwards.

This was more a one-match wonder, but still pretty remarkable as in 2014 Newcastle manager Alan Pardew, later claiming he had been provoked, unleashed a foul-mouthed rant on the touchline aimed at 60-year-old Manchester City boss Manuel Pellegrini.

"I hear my comments were picked up and I apologise for them 100%," said Pardew. "In the heat of the moment we had words as we managers always have.

"I have apologised to him. And fortunately he's accepted."

Mourinho won the Premier League three times with Chelsea but his animosity with Antonio Conte started at Stamford Bridge in 2016. Conte's Chelsea had thrashed Mourinho's Manchester United 4-0, with the Portuguese unhappy at how Conte had celebrated their fourth goal.

The following season Mourinho said some managers "acted like clowns" on the touchline, believed to be talking about Conte and Liverpool boss Jurgen Klopp.

Conte responded by accusing Mourinho of forgetting how he himself had acted during his managerial career. In 2018, Conte then called Mourinho "a little man" and a "fake".

Thanks Pindula for bringing the EPL deadline day transfers. Keep the news coming for the rest of the season nhyka?
Also give us results after Avery game is played. Munozomboti zii zvenyu

Jose the special one