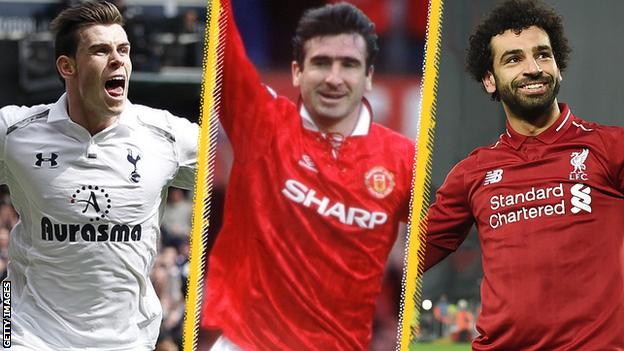 Voted for as the best player in the league by your own peers, the ultimate accolade.

Gary Lineker, Alan Shearer and Micah Richards will return in the spring with their latest series of the Match of the Day Top 10 podcast on BBC Sounds, ranking their top 10s from an assortment of topics across the Premier League era.

One of those subjects will be previous PFA Player of the Year winners and we're giving you an early chance to get involved, by letting you pick your top three, with the trio of pod regulars seeing your choices before recording begins.

Best PFA Player of the Year

Rank your favourite Premier League PFA Player of the Year

"We've tried to make sure everyone who has won it twice during the Premier League era is on there, so Shearer makes it," said Lineker.

"Trying to knock this list down to 10 was just impossibly difficult, though. There are some amazing stories behind everyone's seasons.

"I won it myself in 1986, which doesn't count for the purpose of this list, but I am incredibly proud to have been recognised. It means a lot to be voted as the best by your fellow players.

"So two out of the three of us have won it. The closest Micah came was to make the shortlist for the Young Player of the Year in 2007 but someone called Cristiano Ronaldo beat him to it - and took the main award that season too.

"I am still not sure why they decide it before the season finishes but at least they do it later than they did in my day, when the vote would be held in February, which was way too soon.

"Otherwise I think I would have won it again in my last season in English football, 1991-92. I got the Football Writers' Footballer of the Year award that year but I'd had a spell where I'd not played because my son George was in hospital and I stopped playing to be there with him. Then I came back and had to find my fitness again, so I had a little bad patch just before the PFA vote.

"I finished the season strongly - although Ian Wright still scored one more goal than me to pip me to the golden boot - but Manchester United defender Gary Pallister got the PFA award.

"Considering what I'd been through, though, I was actually more proud of what I did that season than when I won it in 1986.

"I'd been injured for most of 1991-92 too, and was just limping along so that was the best season of my career in many ways. Again, we can discuss all of that. Micah was too young to remember it but I am sure Alan and I will!"

Ruthless striker Shearer makes yet another MOTD Top 10 list. He scored 34 goals in 42 games to spearhead Blackburn Rovers to the Premier League title in 1994-95 to win the PFA Player of the Year award.

The ex-England skipper won the gong again two seasons later, this time at Newcastle when he netted 25 times in 31 games as the Magpies finished runners-up in the top flight.

Elegant and graceful, Frenchman Henry fired in 24 goals and provided an incredible 20 assists in 37 games in 2002-03 but it was not enough to lift the Premier League trophy, though it was a season filled with individual honours with the Football Writers' Association and Fans' Player of the Year award going alongside the main award.

Henry went one better the following season as his 30 goals helped Arsenal go the full season unbeaten and he swept up when it came to awards by taking the three from the previous season as well as adding the Premier League Player of the Season.

One of the greatest players of all time.

Ronaldo was almost unstoppable for Manchester United between 2006 and 2009, scoring a total of 66 league goals before moving to Real Madrid for a then world record £80m fee.

Like Henry, Ronaldo claimed all the individual honours in 2006-07, including the Young Player of the Year award, backing up his feat in the following season too.

There used to be a time when Bale could not win a Premier League game and was a figure of ridicule, being on the fringes of the Spurs first team. How he turned his fortunes around.

Welshman Bale's seven goals and one assist from 30 games was enough to claim the award in 2010-11 but he played a starring role in 2012-13, scoring 21 goals and laying on four assists, before securing a record £85m move to Real Madrid.

One of the best passers the Premier League has seen, De Bruyne has the quality to pick out a defence-splitting ball.

The 2019-20 season will be remembered for Liverpool finally winning the Premier League title, but Belgium international De Bruyne was the undoubted star man of the campaign, netting 13 goals and equalling Henry's record of 20 assists in a single campaign.

He netted a further six goals and laid on 13 more assists the following season, and this time it was enough for City to wrestle the title away from the Reds.

Boy wonder Rooney started his career at Everton and went on to become not only Manchester United's leading goalscorer of all time but England's too.

The 2009-10 campaign was his most prolific in the Premier League as he scored 26 times when deployed in an advanced forward role for United, but it wasn't enough as the Red Devils were pipped to the title by a point by Chelsea.

All-action midfielder Gerrard was one of the best players of his generation, winning the Champions League, two FA Cups and the Uefa Cup in his time at Liverpool.

The former Reds skipper was the standout player in the 2005-06 campaign, netting 10 goals from the middle of the park but a Premier League winners' medal remained elusive on his CV.

Striker Suarez may have had his flaws but was a superb player and almost single-handedly dragged Liverpool to the Premier League title in 2013-14.

The Uruguayan netted 31 goals and provided a further 12 assists in 33 games in one of the most impressive individual showings by a player in a campaign.

But Suarez knew how costly the 3-3 draw at Crystal Palace was when he left the pitch in tears at full-time, as his side agonisingly ended up runners-up to Manchester City by two points.

The Egyptian King Salah has lit up the Premier League since his arrival at Liverpool from Roma in 2017, scoring a total of 113 goals in 178 games.

He signalled his intent in his first season, the 32 goals he netted was the most in a 38-game season, while also showing his creativity with 10 assists.

Salah didn't win the title that year, but his moment would come two seasons later when he helped end Liverpool's 30-year drought.

The King. The signing of Cantona was one of the most important in Manchester United's history as his acquisition from Leeds provided the catalyst for a remarkable period of success at Old Trafford.

Dinked, smashed, free-kicks, penalties - Cantona scored a vast array of goals and was hailed by his peers as the best player of the 1993-94 campaign, netting 18 times and laying on 12 assists as the Frenchman won the second of his four Premier League titles in his time at the club.