More Rains Expected For The Next Eight Weeks 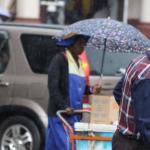 The Meteorological Services Department (MSD) says the wet spell prevailing across much of the country will continue until February, with more rainfall expected for the next eight weeks.

Head of Public Weather Services at the Meteorological Services Department (MDS), James Ngoma, said farmers may plant cereals up to 15 January after which they may not mature.

The MSD is still projecting a normal to above normal rainfall season despite a dry spell that affected some parts of the country in December. Said Ngoma:

Most of Matabeleland North, South, Masvingo as well as part of the Midlands had rains for much of this season.

The main areas that were mainly affected because of this dry spell in December were Mashonaland West, Central, East, Harare Metropolitan Province and Manicaland.

These received less rainfall in the month of December and not for the rest of the country.

Based on that, we have the Inter-Tropical Convergence Zone (ITCZ) that comes out from the northern part of the country, from Zambia going into Zimbabwe so these areas mentioned above are closer to Zambia than the rest of the country.

So, they are receiving the current rainfall that we are having right now.

These rains are the main rains that are experienced during the rainy season in Zimbabwe, so these will give us continuous rainfall for a 60-day period.

Ngoma said the ITCZ does not reach far into Masvingo and Matabeleland South therefore the two provinces will receive less rainfall from the frontal system. He said:

Farmers should expect more of these intermittent rain showers that we have been experiencing for at least a couple of more weeks.

It’s good news for most farmers particularly those in Mashonaland Province but for those in Masvingo and Matabeleland South it’s a bit less rain as the ITCZ does not reach that far, it is coming from the north.

Those farmers had their rains earlier and now this current spate of rains is affecting parts of Mashonaland and Masvingo Provinces into the Midlands.

Those that got rains earlier should have started planting crops earlier too because most farmers in Matabeleland North actually depend on the earlier rains than these current rains so most farmers know their rainfall patterns.

It’s only that these current rains came a little bit late because usually they come on the 15th of December but this time around, we saw them late by two weeks so that two-week delay should not really affect the crops.