Mobile Voter Registration Exercise Off To A Slow Start 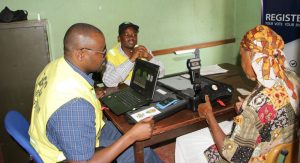 A mobile voter registration exercise that got underway on Tuesday was off to a slow start, with few people turning up at the various centres around the country.

Teams from the Zimbabwe Electoral Commission (ZEC) spent much of the day chatting away as the scores that were expected to flood the centres turned out to be a trickle.

Zimbabweans vote in general elections in the second half of 2023.

ZEC is using the decentralised voter registration exercise this month to give Zimbabweans an opportunity to register as voters, with the consolidated voters roll set to be used to redraw constituency boundaries during a delimitation exercise starting in August.

Turnout was particularly unimpressive in Bulawayo, which ZEC has warned could possibly lose two of its 12 constituencies owing to low numbers of registered voters.

Some officials said it was possible that some people would come later in the afternoon after attending to their fields.

It’s sad that registration centers are empty. We urge our people who have not registered as voters to visit the centers and register. It’s particularly important for youths, they need to make use of this time and parents should be encouraging hem. If we don’t, we may lose a number of our constituencies which will mean reduced funding coming to the province in the form of Constituency Development Fund.

Sibindi added that the region may lose other monies that the government allocates based on voting numbers and representation in parliament will be reduced as well.

In the capital Harare, turnout was also reported to be very low.

In a statement, ZEC said heavy rains were presenting access challenges to some areas where it is supposed to register voters.

The electoral body said it may be forced to change its programme in affected areas.

The Registrar General used to carry put this exercise and this was done in a very clear way ,i doubt the credibility of ZEC to carry out this mammoth task as they have been pperating under unclear circumstances before