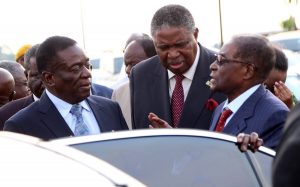 The late Robert Mugabe was forced to resign as party president after that meeting.

He also resigned as Zimbabwe President after the ruling Zanu PF party and then opposition MDC Alliance combined efforts and initiated an impeachment process.

Musengezi who is represented by Nqobani Sithole said the ruling party purposely withheld information with regards to the whereabouts and alleged incapacitation of Mugabe and the alleged absence of the Vice-President and second secretary (Phelekezela Mphoko) so as to mislead the court.

He repeated his allegation that the central committee that ushered in Mnangagwa as acting party leader was null and void. He said:

Last year, Obert Mpofu argued that the High Court had no jurisdiction to hear the case, adding that Mnangagwa enjoyed presidential immunity.

He also argued that Musengezi was not a Zanu PF member, contrary to his claims despite the fact that Musengezi won the ZANU PF primary elections for Harare North constituency ahead of the 2018 polls and lost to the MDC Alliance’s Allan Markham in the July 31 general elections.

A yellowish mrng to u all