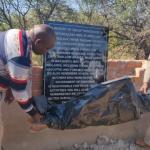 President Emmerson Mnangagwa has come under heavy criticism from pressure groups and opposition political parties after he accused some unnamed individual of attempting to “reignite Gukurahundi”.

In his 2021 Unity Day message, Mnangagwa urged the nation to “guard against those negative elements which aim to re-ignite frozen differences to throw us back into renewed conflict”.

It is sad that the murderer of the innocent man and woman, school children is accusing, condemning innocent people who are saying the process must not be perpetrator lead but victim cantered and lead by an independent commission.

He can threaten or issue statements, but I challenge him (Mnangagwa) to say one thing tangible since 2019 that has come out from his engagements that has healed or benefited victims.

Mnangagwa was the state security minister during the Gukurahundi era and is accused of having played role in the atrocities.

Fuzwayo suggested that if Mnangagwa is sincere about addressing Gukurahundi, he should at least return all ZAPU and ZIPRA properties which were confiscated by the government in 1982. He said:

Up to now, Mnangagwa has not returned ZPRA veterans’ properties despite cheating them to help him stage a coup against Robert Mugabe.

Also, to declare that those Gukurahundi victims who need medication and national documents can access the facilities is still nothing except low hanging fruits.

This just shows that Emmerson Mnangagwa is unrepentant. It is unfortunate that he continues to make assertions that the victims caused the genocide.

Otherwise, how do you explain his warning about re-igniting Gukurahundi? How do you re-ignite what you didn’t ignite in the first place?

MDC Alliance Bulawayo provincial spokesperson Swithern Chirowodza said there can only be progress if the victims of Gukurahundi are fully represented in the process. He said:

We all know that the government has been working with ZANU PF aligned structures such as the chief’s council and certain captured organizations to purportedly address the Gukurahundi issue.

This top-down approach will not yield anything unless the victims are fully represented in these processes.

Try it and see what happens my boy. Its getting started, any force used to silence the Mthwakazi hehehe some people will fly back from matebeleland with their backs burning like hell.

your grammar is pathetic

Let's build our nation as one unit. Zvegukurahundi zvakatopfuura. Dissidents were terrorising the shonaz and gvnmnt through the ministry of state security had to stop these killings. Ska what was done waz OK to bring peace. The peace we all now enjoy. Pple have their agenda for regime change and they want to use the ndebelez. So bad. Mukada kutanga fut mnosvasvangwa. You want to reverse the gains of the unit accord signed and agreed for by the two icons. Ngatidzidzei kuregererana as a country. We are one pple

What is this guy saying? Such conflicting statements. You first said what was done was ok since "dissidents were terrorising the Shonas(sic)" and then you went on to say "ngatidzidzei kuregerana as a country" well those are self contradictory comments in the former comment you made it clear that there was terrorism on the ground that needed to be stifled and neutralised and then in the latter statement you now say there must be forgiveness. How can there be forgiveness if you say nothing wrong was done? Clearly, your statement is from a desperate man who wants the Gukurahundi issue swept under the carpet. Reality of the matter is there won't be forgiveness if there's no truth telling and sincere apologies. And the fact that those aggrieved are still talking about it is some sign that the issue is still a thorn in their side. The country had made progress on the issue after there were Commissions of Inquiry into the disturbances namely the Dumbutshena and Chihambakwe Commissions but the reports were not released rather they were said to have gone missing an indication that the evidence in those reports implicated those in high offices and they chose to suppress the release of the Commissions reports. The Gukurahundi issue has to be resolved there must be truth telling and sincere apologies on the part of the perpetrators and only after that there will be forgiveness.

US$0 Harare
Roosy 5 months ago

Tribalism was born by this Gukurahundi thing which took place in Matabeleland and Midlands ,too bad.

LADIES AND GENTLEMEN, ALLOW ME TO JOIN YOU IN DISCUSSING THE PROS AND CONS OF RESOLVING GUKURAHUNDI DEBACLE.

ZANU PF OR ZANU PF GOVERNMENT MUST NOT CHOOSE WHO TO TALK TO AND WHO NOT TO TALK TO. IT WOULD SEEM SOME PEOPLE HAVE PICKED CHIEFS AS THE ONLY QUALIFIED PEOPLE'S REPRESENTITIVES. CHIEFS, OTHER POLITICAL PARTIES, CIVIL SOCIETY GROUPS, AND OTHERS INCLUSIVE, MUST BE INCLUDED.

THERE IS A WRONG NOTION THAT GUKURAHUNDI ONLY INVOLVED PEOPLE FROM MATABELELAND PROVINCES AND MIDLANDS PROVINCE. NO, PEOPLE FROM MASHONALAND WEST WERE ALSO AFFECTED, ESPECIALLY ZVIMBA, CHIRAU, SANYATI AND THE WHOLE OF HURUNGWE DISTRICT.

THERE ARE THOSE OF US WHO THINK UNITY ACCORD OF 1987 SETTLED GUKURAHUNDI DEBACLE. THAT IS WRONG MENTALITY. THE GREAT ICONS CDE NKOMO AND CDE MUGABE RESOLVED THEIR POLITICAL ISSUES ONLY AND NOT SOCIAL ISSUES WHICH WE ARE NOW SEIZED WITH. THE TWO ICONS ONLY DISCUSSED HOW TO STOP THE DISSIDENTS WAR AND NOT WHAT TO DO WHEN THE WAR STOPPED.

AS WE DISCUSS THE WAY FORWARD, LET US NOT POINT FINGERS AT OTHER PEOPLE. WHATEVER HAPPENED THAT TIME, HAPPENED IN UNISON AS A ZANU GOVERNMENT, TOGETHER.

I think one of the major issues in this case is fact that those who are "fighting" for the gukurahundi to be resolved are not sincere from both sides.
If I was the Munhumutapa of Zimbabwe and I know that certain individuals and groups incriminate me(personally) and say that I must be tried as an individual then I would throw the issue at garbage heap. It's about revenge on the president and only a fool will allow that to happen when he or she is in a position to protect himself. I cannot judge the president's insincerity but ini ndaitozvichengetedza using whatever means if there are insinuations of revenge not true reconciliation.
Kozotio ana Chamisa vanongohakira. He does not realize that if he becomes President issue yegukurahundi iyi he can't solve it as easily as it looks. Tuma NGO ndosaka tuchivhiringwa tongoremberao pane dzisinei natwo.
An independent reconciliation commission with no ulterior motives is the way to go.

So true. Forgive, forget and genuinely love another.

What the hell are you talking about. The issue was solved a long time ago on The national Reconciliation day. Which is Unity Day. They did that for a reason. Forgive and Forget. It's over. Why are you still talking about it

Gukurahundi was over a long time ago. No need to even talk about it. Nkomo and Mugabe resolved their differences. I don't want to hear any bullshit about this. The govt did a great Job in stopping Dissidents who had become revels and were busy terrorising the peaceful Shona people for no reason. Thanks to Mugabe, he dealt with the rebels quickly otherwise Zimbabwe would be destroyed and divided right now. Thank you vakuru vedu. Well done. Tinotenda nebasa ramakaita. Sekuru vangu kwaGutu vakange vahwa nekushungurudzwa nema Ndebele iwaya. Makagona to stop the rebels. Great Leaders✊