"Mnangagwa Took A Drinking Oath In The 1970s" 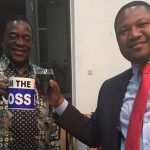 Presidential spokesperson George Charamba has claimed that President Emmerson Mnangagwa only takes alcohol in the first six months of the year, a routine drinking habit he has observed for over forty years.

Charamba said this in response to a video that went viral on social media platforms over the weekend which showed Mnangagwa seemingly drunk.

The video was shot on Saturday when Mnangagwa was officiating at a fundraising event and launch of the Emmerson Dambudzo Mnangagwa University of Zambia scholarship programme.

In the video, Mnangagwa appeared to be struggling to walk steadily and was “helped” to get to the podium.

Posting on Twitter, Charamba said during the armed struggle, in 1978, senior guerilla army officials took an oath against heavy drinking.

The oath was taken in the aftermath of the death of Peter Baya, then Zimbabwe African National Liberation Army (ZANLA) commander, according to Charamba.

ZANLA was the military wing of Zanu during the armed struggle.

Baya succumbed to a liver condition in the late 1970s, allegedly due to heavy drinking. Charamba tweeted:

The visibly upset Tongogara (late chief of defence (CoD), Josiah) reminded all present that as freedom fighters, they all had taken an oath to die from enemy bullets, not from alcohol as had happened to Cde Baya.

From now onwards, bellowed the no-nonsense ZANLA CoD, every senior officer had to take mhiko (oath) committing them to a restrained drinking cycle.

Charamba claimed Mnangagwa was among the guerilla leaders who took the oath. He wrote:

While other commanders would break their oaths almost immediately upon making them, young Emmerson who was also head of security, adhered to his, religiously, right up to the end of the struggle.

He did more. He took this austere drinking schedule into independence, right to this day.

Charamba further stated that President Mnangagwa takes alcohol moderately in the first half of the year and totally abstains during the rest of the year. He said:

Those of us who work close to him know that the President’s year is divided between wet season, which starts on the eve of each year, and dry season which religiously commences 1st June again each year.

The wet season passes for the opening six months during which the President may entertain a bit of alcohol, even then on very few social occasions.

PRESIDENT ED'S TWO LIEUTENANTS, CAMARADAS GEORGE CHARAMBA AND NICK MANGWANA WANT TO IMPRESS THE PRESIDENT BY DEFENDING HIM AT ALL COSTS. SO FAR SO GOOD GENTLEMEN. YOU ARE SAYING THE PRESIDENT HAD NOT TAKEN THE WISEMEN'S WATERS, BUT THE PRESIDENT LOOKED WISE ON THE DAY IN QUESTION, CAMARADA CHARAMBA.

BUT GENTLEMEN, LET US NOT LIKEN OUR PRESIDENT ED MNANGAGWA TO A SOBER JUDGE. WHO CERTIFIED THAT ALL JUDGES PRESIDE OVER CASES IN THEIR SOBER SENSES? JUDGES ARE HUMAN BEINGS. THEY ALSO ERR. I DO NOT KNOW IF JUDGES MAKE SUCH VOWS WHICH ARE IN CONNECTION WITH TAKING THE WISEMEN'S WATERS.

TODAY CAMARADA CHARAMBA TOLD US THAT OUR PRESIDENT DOES NOT DRINK THE WISEMEN'S WATERS IN THE LAST 6 MONTHS OF EACH YEAR AS A COMMITMENT TO THE VOW WHICH HE TOOK IN 1978. THAT EXPLANATION DOES NOT SHOW INTELLIGENCE BECAUSE MORE IMPORTANT VOWS HAVE BEEN BROKEN IN THE PAST. TODAY IN FRANCE SOME PRIESTS ARE BEING INVESTIGATED FOR BREAKING VOWS OF CELIBACY TO GOD. VOWS CAN BE BROKEN.

They system has a plethora of spokesperson from all angles and they always scramble to spin an incident or event that would have happened and boy its happening on this incident. Nick Mangwana said yesterday that Mnangagwa was sober as a Judge now Charamba is saying Mnangagwa has wet and dry seasons when it comes to drinking and he's currently in his dry season. Wait for it Martin Dinha and others will also chip in soon defending Mnangagwa's sobriety. My point is when one is sober, he doesn't need anyone to explain to onlookers that he's sober.

May tou give us yesterday football results @pindula or anyone hake.

May tou give us yesterday football results @pindula or anyone hake.

Champions of Europe, Chelsea massacred Juventus by 4 goals to nil.

Man u were 2 nil winners away to Villareal courtesy of Cristiano Ronaldo and Sancho's first goal for the red devils. The teams were goal during the first half break and play was looking pretty from both sides. Michael Carrick's substitutions of Bruno Fernandos, Juan Mata and Marcus Rashford brought in stability in the game. A ball control error from the home team gave Ronaldo a chance and he lobbed it into the top corner. Fine finish from Sancho in the 90th minute gave cheers to the fans. At the end of fixture it was the caretaker manager who won it at last.