Mnangagwa: Rhodes' Remains Must Be Returned To Britain 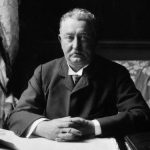 President Emmerson Mnangagwa said the remains of British imperialist Cecil John Rhodes can be exhumed from the Matopos National Park in Matabeleland South and sent to Britain.

Mnangagwa said this while addressing chiefs at the annual Chief’s Conference in Harare on Friday.

He said the remains of the founder of the former British colony, Rhodesia, were of no importance to the country and should be sent to the United Kingdom and Britain should reciprocate by repatriating the remains of Chimurenga heroes. Said Mnangagwa:

We still have Rhodes’ remains in Matobo. What do you think about it? If you go to the shrine, you don’t know whether you are talking to Rhodes or our ancestors.

His remains must be returned to where he hailed from and we can also have our ancestral remains which are being kept in Europe.

In 2012, the late former president Robert Mugabe blocked war veterans and ZANU PF members from exhuming his remains, saying his legacy was part of the country’s history.

Rhodes (1853-1902), was imperialist par excellence, a businessman and politician.

He played a dominant role in southern Africa in the late 19th Century and was at the forefront in the annexation of the greater part of the region for the British Crown.

Rhodes envisioned an uninterrupted railway link stretching from Cape Town (South Africa) to Cairo (Egypt) — the entire north to south controlled at the time by the British Empire.

US$8.00 Chitungwiza
Jeff 5 months ago

Died at 43 hey! Why he looks too old for that age even on that pic. What illness killed him?

Died at 43 hey! Why he looks too old for that age even papic iro.

Don't work on past bones or on history work on present things and our future of next generation Don't drive people on past work on future ... Ndozvinongonzera kutii titambudzikee izvozvo zvekugadzirisa zvakare...

WHILE I HATE CECIL JOHN RHODES FOR HIS EXPLOITS IN RHODESIA, NOW CHRISTIANED ZIMBABWE, I DO NOT SUPPORT THOSE WHO WANT TO USE HIS REMAINS AS A BARGAINING POWER TO GET BACK THE REMAINS OF OUR FALLEN HEROES WHICH ARE IN BRITIAN.

I ONCE VISITED CECIL JOHN RHODES' GRAVE IN MATOPO. THE IMPRESSION I GOT WAS THAT PARKS AND WILDELIFE MANAGEMENT KEPT THE PLACE CLEAN AS IT WAS A TOURISM ATTRACTION FOR WHITES WHO WANT TO VISIT HIS THEIR HERO. PEOPLE ACTUALLY PAID MONEY TO VISIT THE CITE. LET CECIL JOHN RHODES' REMAINS CONTINUE TO GENERATE MONEY FOR US.

IT IS UNUNDERSTABLE TO CONTINUE BEGRUDGING A GRAVE. LET US CONTINUE ADVERTISING THE PRESENCE THAT GRAVE TO THE BRITISH AS A TOURIST ATTRACTION AND CONTINUE TO GENERATE MONEY FROM IT.

TODAY THERE ARE BORDER STATIONS WHICH WE HAVE NOT CHANGED THEIR NAMES IN FEAR OF LOSING FOREIGN CURRENCY LIKE FORBES BORDER POST, KARIBA, VICTORIA FALLS AND BEITBRIDGE BORDER POST.

WOULD IT GENERATE MORE OR LESS FOREIGN CURRENCY IF WE CHANGE VICTORIA FALLS TO OMUSIAWATUNYA AND KARIBA TO RARIVA ?

LET US CONVINCE THE BRITISH TO GIVE US BACK CHINGAIRA'S HEAD, MASHAYAMOMBE'S HEAD AND MANY OTHERS WITHOUT USING CECIL JOHN RHODES' REMAINS AS A BARGAINING POWER.

[ONE MAN FOR HIMSELF, BUT GOD FOR US ALL]

Absolutely correct, Rhodes died and it was part of his will to be buried here in Africa Zimbabwe. The remains that Britain took, were taken by force, those people were deliberately killed. Rhodes died a natural death & a fenural was healed for him, I see no reason for extracting his remains. But for those killed, Britain should hand over the remains as a way of saying sorry.

@Bush Lawyer:Kariba is a Tonga native name pronunced as KARIVA in Tonga.

Mnangagwa must also go back to Zambia.