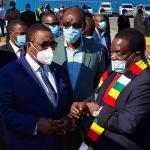 He will join other world leaders who will participate, along with tens of thousands of negotiators, government representatives, businesses and citizens, for 12 days of talks.

In his absence, VP Chiwenga will be Acting President.

The COP26 conference, which starts on Sunday, is where world leaders are being asked to promise more ambitious cuts in greenhouse gases to prevent greater temperature rises.

According to BBC, leaders from 120 countries will be there, but Russian President Vladimir Putin, China’s Xi Jinping and Jair Bolsonaro from Brazil are not coming, pending last-minute changes of heart.

Those three countries are among the biggest polluters and the world needs them to commit to action.