Mnangagwa Must Not Contest The 2023 Presidential Election’ - Chiwenga's Ally 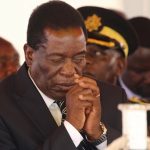 Zimbabwean president, Emmerson Mnangagwa, has been advised not to contest the 2023 election due to his advanced age.

TheNewsHawks reports that prominent corporate executive Caleb Dengu who is a homeboy and an ally of Vice-President Constantino Chiwenga, gave the advice in a book titled The Bridge — Pathway To New Zimbabwe. Dengu said:

Your Excellency, given your advanced age and the workload required to turn around the nation, a nation as broken as ours, it is advised that you do not seek re-election as state president in 2023.

You will be 82 years old then. You can choose to remain as First Secretary of Zanu PF to assist with generational transformation of leadership in the party and government. Given the demography of the country, the nation requires younger leadership to run the country. You have an opportunity to identify competent young talent in the 40-60-year range to take over positions in both government and Zanu PF. The recommended leadership can be security-cleared by our National Security Council (NSC).

On Mnangagwa’s legitimacy, Dengu, who was in the liberation struggle and later in government, said:

Your Excellency, you became leader of Zanu PF during the transitional period from RG Mugabe to the 2nd Republic, which was christened ‘The New Dispensation’ in November 2017. Your elevation to the position of First Secretary did not follow the established election process which starts from provincial nomination.

It is therefore imperative that you revisit that chapter in order to get the full support and endorsement of Zanu PF. This will stop dissent and leadership challenges in the party ranks. Your government is mostly undermined by the Zanu PF elite rather than opposition members.

Dengu, a RioZim Limited board vice-chair said Mnangagwa should visit provinces not just in his capacity as President and Zanu PF official, but as someone seeking to regularise his unlawful position as party leader.

Dengu speaks as Mnangagwa has been dragged to the High Court by a ZANU PF member, Sybeth Musengezi, over his “unlawful” rise to power in 2017.

Meanwhile, the ruling party’s structures are stampeding to endorse Mnangagwa as the governing party’s presidential candidate in the 2021n election.