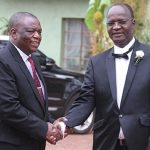 This follows reports that Mnangagwa’s allies are plotting a vote of no confidence against Chiwenga fearing that he may want to run for the presidency in 2023.

Chiwenga was Zimbabwe Defence Forces (ZDF) commander in 2017 when the military overthrew the late Robert Mugabe and replaced him with Mnangagwa.

Other reports allege Mnangagwa and Chiwenga fell out immediately after colluding to get rid of Mugabe after the former reneged on a deal to serve only one presidential term.

Writing on Twitter, Moyo, who was was part of the G40 faction which rivalled Mnangagwa’s Lacoste, said history is now repeating itself. Said Moyo:

History repeats itself as a farce. People in ZANU PF need to wake up and smell the coffee.

Some of us learnt our lessons about Mnangagwa’s treachery in 2004; after the so-called Tsholotsho Declaration.

The Tsholotsho Declaration refers to a clandestine meeting organised by a faction loyal to Mnangagwa in 2004 to plot ZANU PF’s succession.

The plot’s objective was to have Mnangagwa elevated to the vice presidency ahead of Joice Mujuru, succeeding the late Simon Muzenda.

In another tweet, Moyo suggested that Mnangagwa’s loyalists in Masvingo and Midlands Provinces were plotting Chiwenga’s downfall unaware that they were playing with fire. Wrote Moyo:

Dear Mnangagwa, your clansmen in Zanu PF are mobilising dirty tricks against your deputy in government, who is also one of your two deputies in your party.

You do not need me of all people to warn you that you are playing a dangerous game, as good as digging your own political grave!

Mnangagwa carried out a coup to grab power, lying that he is bringing in a new dispensation and a new Republic to end what used to happen in the Mugabe days; yet he is doing the same and, in some cases, doing worse.

THOSE OF YOU WHO READ MY COMMENT THIS MORNING CAN TIE UP LOOSE ENDS WITH WHAT PROFESSOR JONATHAN MOYO IS SAYING ABOUT THE SHENANIGANS IN ZANU PF.

THERE WERE SOME OTHER DECLARATIONS IN ZAMBIA AND MOZAMBIQUE BEFORE THE TSHOLOTSHO DECLARATION. I AM TOLD THAT IN MOZAMBIQUE THESE GUYS HAD "PIT PRISONS". YES, THEY SAY PEOPLE WERE IMPRISONED THERE.