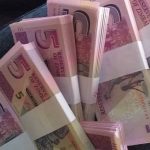 A United States (US) economist, Steve Hanke, says President Emmerson Mnangagwa is not only corrupt but “totally ignorant” when it comes to economic issues.

In a tweet, Hanke said the Zimbabwe dollar has depreciated by 93% against the United States dollar since the local currency was reintroduced in 2019. He said:

Corrupt @edmnangagwa brought back the Zimbabwean dollar 2yrs ago. Since then, the Zim dollar has depreciated by 93% against the mighty USD. President Ed is not only corrupt but, when it comes to economics, he is totally ignorant.

This comes as the forex rate has plummeted on the black market, with the currency changing hands for up to Z$200 per US dollar, while the official rate is pegged at Z$90.

Meanwhile, the Confederation of Zimbabwe Industries (CZI) – the largest representative body for local business, has warned that the country’s currency is in danger of collapsing as businesses resort to United States dollar transactions.

In a tweet on Tuesday, Hanke said threats by the Zimbabwean government to suspend businesses using black market rates will end in tears. He wrote:

Zimbabwe’s currency is in a death spiral. Now, the corrupt government is threatening to suspend all businesses using black-market exchange rates to price goods. I’ve seen this movie before. It has a tragic ending.

Zimbabwean authorities have in recent weeks arrested scores of foreign traders accused of manipulating the volatile Zimbabwean dollar by trading on the black market.

But in a letter to its members, CZI said it had cautioned the government against clamping down on firms and traders. It said:

The greatest risk facing the economy right now is an inappropriate policy response to the rising parallel market premium.

Clamping down on informal exchange trading in the absence of a viable formal market will have catastrophic consequences for the economy.