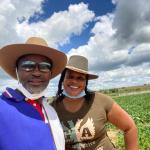 Outspoken Norton Legislator Temba Mliswa (Independent), has denied allegations of having an adulterous affair with a married woman.

Tafadzwa Tamangani (46) accused Mliswa of snatching his wife Janet Tamangani, resulting in him bashing her.

Tamangani made the claim when he appeared before Harare magistrate Evelyn Mashavakure to answer domestic violence charges.

In a threaded tweet, Mliswa accused The Herald, which published the story, of pursuing an evil agenda against him.

The controversial Member of Parliament also accused Tamangani of being “no gooder, whose life revolves around sitting around, going to the gym and nothing else.”

Mliswa also claimed that Tamangani has an erection problem and has had the problem for 10 years after one of his alleged girlfriends cast an evil spell on him.

Mliswa said he and Janet have known each other since their parents were friends and as such, they have a close friendship.

He revealed that they used to live together in Waterfalls and have done business together at some point in time. Said Mliswa:

I would like to set the record straight here on the malicious& half-baked yellow story by @HeraldZimbabwe.

Janet Tamangani & I have known each other since our parents were friends. They were both in Zambia. We lived in Waterfalls together & both of us went to Lord Malvern.

At some point, I even assisted her to go to the UK. I have always been a person with whom she talks candidly.

We have also done business together because she is a sharp business person. We have been that close. I’m an uncle to their kids and we know each other very well.

I have known about problems in their marriage for years and it’s a travesty of truth to allege that I caused the problems.

The husband has always been a no-gooder, whose life revolves around sitting around, going to the gym and nothing else.

He used to draw money clandestinely from their accounts. He has always abused her, beat her up and I have previously told Janet to take the kids to boarding school so as to avoid the toxic atmosphere at home.

I advised them about Rydings school where my own kids go so that I could also assist when they couldn’t. When she was beaten this time I advised her to go and report to the police. That is the reason her husband is angry at me. He is a wife-beater, lazy and useless.

That she came to my place with her kids after being beaten is nothing unusual because I’m like her big brother. I told the husband that if he followed her to my place I would deal with him as a man.

For him to soil me like this he will have to provide evidence or I will sue him. He has failed himself. I have actually worked hard supporting him to keep the marriage but divorce began in 2018. The marriage has been done for years.

At one point I sat with them & tried to make things work but it failed. He sees me as the one who failed their marriage only because I have supported his wife.

I have always been clear about whom I date. I don’t date people’s wives. They have long had problems& it’s his lack of introspection  & maturity that he would blame an outsider for this. I’m self-respecting enough to know my friends from those I date. Janet is a friend.

It’s unfortunate that rags such as The @Herald, in their misguided, political and polarised efforts to tarnish me, jumped onto a tabloid headline and missed the actual issue.

The state publication has an agenda against me because I have constantly unsettled their beloved most of whom have brought this country to its knees.

That is why their articles about me are always lacking in terms of standards and professionalism.

@HeraldZimbabwe Their articles are mere hatchet jobs lacking the spine of journalistic etiquette & heavy on unverified negative insinuations against those they are made to believe are opponents. The prime objective of their articles is to taint me.

A whole article founded on an uninterrogated one-liner!! However, I cannot be tainted by a publication that has lost its spine and is now a mere PR yellow paper heavy on puerile confetti and lacks the rigorous substance any self-respecting paper ought to have.

They never sought for my side in the story& it lacks balance. It’s the hurried& excitable creation of a limited paper that is down in the gutter.

@ZimMorning_Post did the same in the Susan [Mutami] case but as with all hatchet jobs, you can’t put a good man down on such inanities.

It’s a dire indictment of how the media standards at the @HeraldZimbabwe have fallen that such a paper, expected to be the standard-bearer in the industry, carries such trash as stories.

Woe to you my brother the Kingdom of God is at hand repent repent repent.Blessed is you who hear my words and act accordingly for they are life to you.

I HAVE NEVER BEEN IN PHYSICAL CONTACT WITH CDE MLISWA. BUT OF ALL THE CURRENT MEMBERS OF PARLIAMENT, TEMBA MLISWA IS SHOULDERS ABOVE OTHERS. HE WAS AT ONE TIME A MEMBER OF PARLIAMENT IN HURUNGWE WEST BEFORE HE WAS UNCEREMONIOUSLY BUNDLED OUT BY ZANU PF FOR TELLING IT AS IT IT. MLISWA WENT BACK LATER AND CAMPAIGNED FOR HIS SISTER, MARRY, WHO IS THE CURRENT ZANU PF MP FOR HURUNGWE WEST. HE IS LIKED IN THE CONSTITUENCY BECAUSE OF HIS HARD WORK AND SHREWDNESS.

SO FAR SO GOOD FOR CDE TEMBA MLISWA. I HAVE READ SEVERAL ARTICLES ON CDE TEMBA MLISWA CONCERNING WOMEN. THERE WAS ONE ZIMBABWEAN WOMAN FROM AUSTRALIA AND ON HIS ADMISSION HE IS A FATHER OF 14-18 CHILDREN WITH DIFFERENT MOTHERS. SOME ARE ATTENDING SCHOOL AT RIDINGS PRIMARY SCHOOL, 4 KILOMETRES OUTSIDE KAROI.

CDE MLISWA DESCRIBES TAMANGANI IN BEDROOM WITH JANE. HE TELLS US THAT TAMANGANI HAS ERECTION PROBLEMS IN BED. SUCH BEDROOM PROBLEMS ARE USUALLY KEPT UNDER LOCK AND KEY EXCEPT TO VANA TETE, VANA MBUYA, ETC. FOR TETE JANE TO TURN CDE TEMBA MLISWA INTO HER TETE WAS WRONG. CDE MLISWA IS NOW SPILLING THE BEANS AT A PLACE WHERE HE SHOULD NOT SPILL THEM.

I WILL NOT VENTURE INTO CDE TEMBA MLISWA'S WAR WITH THE HERALD NEWSPAPER. [NDAITA MUTETE].

BY THE WAY, TEMBA MLISWA NOW OWNS SPRING FARM, 3 KILOMETRES FROM KAROI ALONG HARARE - CHURUNDU ROAD. I WAS BORN AT SPRING FARM IN 1950 WHEN MY FATHER WAS A SENIOR FOREMAN AT THE FARM. I AM HAPPY THAT CDE MLISWA HAS NOT COMPLETELY PUT TO WASTE THE FARM.

I HAVE NEVER BEEN IN PHYSICAL CONTACT WITH CDE MLISWA. BUT OF ALL THE CURRENT MEMBERS OF PARLIAMENT, TEMBA MLISWA IS SHOULDERS ABOVE OTHERS. HE WAS AT ONE TIME A MEMBER OF PARLIAMENT IN HURUNGWE WEST BEFORE HE WAS UNCEREMONIOUSLY BUNDLED OUT BY ZANU PF FOR TELLING AS IT IT. MLISWA WENT BACK LATER AND CAMPAIGNED FOR HIS SISTER, MARRY, WHO IS THE CURRENT ZANU PF MP FOR HURUNGWE WEST. HE IS LIKED IN THE CONSTITUENCY BECAUSE OF HARD WORK AND SHREWDNESS.

SO FAR SO GOOD FOR CDE TEMBA MLISWA. I HAVE READ SEVERAL ARTICLES ON CDE TEMBA MLISWA CONCERNING WOMEN. THERE WAS ONE ZIMBABWEAN WOMAN FROM AUSTRALIA AND ON HIS ADMISSION HE IS A FATHER OF 14-18 CHILDREN WITH DIFFERENT MOTHERS. SOME ARE ATTENDING SCHOOL AT RIDINGS PRIMARY SCHOOL, 4 KILOMETRES OUTSIDE KAROI.

Mmmm fishy...how does he know about the man's dysfunction

Mliswa stood up for the woman he takes for a friend,a friend in need is a friend in deed.If Mliswa was dating this woman,was that woman going to take her kids to a married man's house?
Mliswa is a community leader therefore it is his right to defend,counsel and unite fellow citizens.Well done Mliswa keep,we the mature understand you.