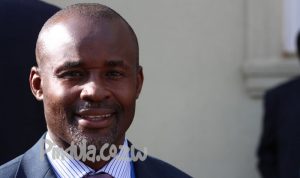 Norton MP, Temba Mliswa (Independent) and his former girlfriend, Cynthia Mugwira, a Harare-based lawyer, have been given a one-week ultimatum to end their dispute pertaining to the upkeep of their minor children.

Mliswa and Mugwira have been in and out of court over the upkeep of their two minor children.

In 2016, the court ordered Mliswa to pay $8 000 as maintenance for the two children but the two are in disagreement on the choice of school for the kids.

Mliswa has opted for a government school while Mugwira prefers a private school.

The two were back in court on Thursday where they appear before Justices Emilia Muchawa and Neville Wamambo. The judges ruled:

We are giving both parties up to February 4th to find each other and file their consent in the form of a draft order.

Failure to do this, the court will be left to reserve its judgment.

We also urge parties to put their petty differences aside and consider the needs of the minor children first.

Mliswa recently StarFM, told a local station that he has 19 children and is providing for the upkeep of three children even though paternity tests proved that the three are not his biological children