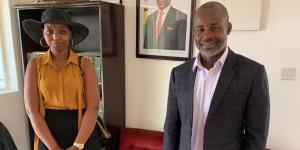 Mliswa and Mutami have, over the past several months, been involved in a war of words using social media platforms following their acrimonious separation.

Mutami, a businesswoman and socialite based in Australia, has accused Mliswa of neglecting his children and failing to cater for their financial needs.

Posting on Twitter, Mliswa expressed doubt over the existence of the alleged twins, asking why Mutami has never shared pictures of the children together. Wrote Mliswa:

Ko, Mai MaTwins (?), @susan_mutami balance me here. When all is said&done, I don’t want to act irresponsibly, so in the spirit of tidying up affairs, we all need closure and a positive way forward. I’m a bit confused though, do you really have twins?.

I’ve only ever received one birth registration form for one child, you had the same one sent at 2 different times on the same day, look at the reg #.

In your pics you only ever have one with you, in this picture [posted on Twitter by Mutami], there’s only one child seat. Saka (so) Susan, imwe Shumba iripi (where is my other son)?

Inga (by the way) the form clearly says what to do in the event of twins. Huuya tiite DNA, then kana vari(ari) wangu, Shumba ngadzipinde mudanga! (Let’s go for DNA tests are if I’m the one who sired the children, then I will support them).

Asi are you claiming only one is mine and the other is someone else’s?….(no photoshop please) the ball is in your court to clear this up…

Oh, and the reason I’m using this platform is that it seems you’ve very publicly pulled the wool over many eyes and I’m sure they’d want to know too.

Unfortunately, Themba is right on this one. Man who are waffling here are doing so in their own sea of stupidity. You don't realize what the hell of cheats these women can be. Vakadzi indurururani ava, yu only need to watch tinashe mhgabe's show to see for yourself. These women are only after money and will do anything to have it. ...it is very normal for any reasonable man to doubt any partenity outside marriage..

I personally wouldn't want to comment about someone's private life especially bedroom issues, but @mliswa being a public figure i think you would forgive me if i call @mliswa an un responsible father. What kind of a man/leader would actually have no idea weather the woman he impregnated had twins or not...he never met his child face to face, i feel very sorry for the little boy.

CAMARADA TEMBA MLISWA IS DEADLY RIGHT BECAUSE THE ALLEGED TWINS ARE SAID TO HAVE BEEN BORN IN AUSTRALIA. HE HAS NOT SEEN THE TWINS ONE ON ONE. HE HAS OCASSIONALY BEEN SHOWN A PICTURE OF ONE CHILD.

WITH THESE ANOMALIES, ANY NORMAL AND REASONABLE PERSON, LIKE MLISWA IS, IS INCLINED TO BE SUSPICIOUS OF THE EXISTENCE AND PATERNITY OF THE TWINS.

[ BY THE WAY TEMBA, HOW ARE YOU DOING THIS SEASON AT SPRING FARM ? I ENJOY TO KNOW THE GOINGS ON AT SPRING FARM BECAUSE I WAS BORN IN 1950 AND BRED THERE WHERE MY FATHER WAS A SENIOR FOREMAN ]