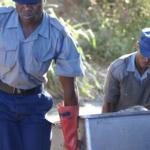 A 28-year-old man from Mutare’s Chikanga suburb who went missing two weeks ago was last week on Thursday found hanging from his late parents’ roof in the same suburb.

Police confirmed the incident and said the body of Brandon Zimba Marange was in an advanced state of decomposition.

We are still investigating the matter. Preliminary investigations, however, reveal that Marange hanged himself from a roof truss for unknown reasons.

He was staying at his late parents’ house alone when the incident happened.

Children who were playing outside his house felt a strong odour and saw flies that were coming out of the room.

They alerted neighbours who peeped through the window and saw Marange’s body hanging from a roof truss.

Grace Bema who was among the first people to attend the scene made a report to the police. The body was in an advanced state of decomposition.

One of the neighbours, Rufaro Mafune, said they never suspected that Marange was dead inside the house even though they had been looking for him for the past two weeks. She said:

We suspect that he was killed, and the suicide was stage-managed because there were bloodstains on his shirt.

So does it mean being a soft spoken person makes u incapable of committing such acts.no it hapns to everyone despite who you are people need counselling even the fact that he lived a lone life perhaps he had no one to share with what was deep inside his heart