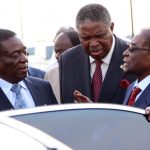 Minutes of the ZANU PF’s central committee meeting held on 19 November 2017 that resolved that President Emmerson Mnangagwa be appointed as Interim President and First Secretary of the party have emerged.

After the late President Robert Mugabe was pushed out through a military coup, ZANU PF held a meeting to install a new leader, although Mugabe had remained the leader of ZANU PF and head of state until 21 November 2017, when he resigned.

The meeting was called and chaired by Obert Mpofu, who was the ruling party’s secretary for finance.

Musengezi observed in his court papers that the ZANU PF constitution says only the first secretary, the second secretary or the chairperson can preside over a central committee meeting. The resolutions of the meeting read:

That; the unconstitutional removal of Cde Emmerson Dambudzo Mnangagwa as vice-president and second secretary of Zanu PF, and his expulsion from the party be and is hereby nullified forthwith and that he be restored to that position, as well as his membership to the central committee.

That; the resolutions from Provincial Coordinating Committees (PCCs) suspending and expelling members from the party and hereby nullified. That; all members of the Central Committee elected at the 2014 congress and who were subsequently suspended or expelled from the party subsequent to congress, on the basis of fictitious/fabricated allegations by the G40 cabal, whose major objective was protection of criminals, be and are hereby reinstated.”

That; members from the lower organs of the party (provincial, district and branch councils) who were suspended or expelled from the party subsequent to the 2014 congress be and are hereby reinstated forthwith to the positions they held.

That; Cde Robert Gabriel Mugabe be and hereby recalled from the position of President and first secretary of Zanu PF forthwith. That; Cde Robert Gabriel Mugabe resign forthwith from the position of President and Head of State and Government of the Republic of Zimbabwe, and if a resignation has not been tendered by midday 20th November 2017, the Zanu PF Chief Whip is ordered to institute proceedings for the recall of the President in terms of Section 97 of the Constitution of Zimbabwe Amendment (No 20).

That; Cde Phelekezela Mphoko be and is hereby recalled from the position of Vice-President and Second Secretary of Zanu PF for; being divisive, a member of the G40 cabal, tribalist, protecting criminals, preaching hate speech and behaving in a manner inconsistent with the office and decorum of the office as Vice-President.

That; Cde Grace Mugabe be and is hereby recalled from the position of Secretary for the Women’s League of Zanu PF for promoting hate speech, divisiveness, and assuming roles and powers not delegated to her office.

That; the Cde Emmerson Dambudzo Mnangagwa be and is hereby appointed as Interim President and First Secretary of Zanu PF pending ratification by the Extra-Ordinary Congress scheduled for the 12th-17 December 2017.

That; Cde Emmerson Dambudzo Mnangagwa be and is hereby appointed as Zanu PF’s nominee to fill the vacancy of President and Head of State and Government of the Zimbabwe in terms of Part 4 of the Sixth Schedule of Constitution of Zimbabwe Amendment (No.20) 14(4)(b) as read with subparagraph (5).

They also agreed that the extraordinary congress would ratify decisions of the central committee, in particular the appointment of Mnangagwa as the president and first secretary of Zanu PF and the recall of Mugabe.

Other resolutions were to amend the party’s constitution to remove one centre of power.

According to the minutes, a quorum of 151 members was met and 201 members of the total 300 central committee members were in attendance.

In his court application, Musengezi argues that this meeting was unconstitutional and illegal.