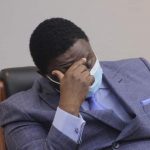 Minister of Home Affairs Kazembe Kazembe has reportedly leaked Politburo deliberations to villagers in Rushinga in a bid to entice voters to vote for him in the upcoming party provincial elections.

Musanhi who is the most senior party member in Mashonaland Central province is said to be supporting Tafadzwa Musarara election bid.

As you all know Makamba was disqualified (and) according to Minister Kazembe,  the cause of Makamba’s disqualification was pushed by Musanhi in the Politburo, this was done to pave way for Musarara. So we are urging you all to vote for Kazembe since Makamba had a strong ground here, you now know your enemies.

Kazembe who is set to be soliciting support in Rushinga on Christmas day refused to comment.

ZANU PF supporters in Mashonaland Central are geared for the Provincial election slated for Tuesday.

ZANUPF will undo itself... relax. Autolysis 🤣