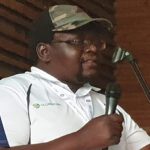 MDC-Alliance parliamentary hopeful for Mberengwa North Takavafira Zhou has condemned the destruction of housing units at C-Mine in Mberengwa by the new mine owners.

Zhou who is MDC Alliance spokesperson for Midlands lost the election in the 2018 general election and is keen on trying again in 2023.

He described the destruction of the properties, which took place on December 9, as a dark day for the residents of C-Mine, “darker than the darkest night”.

Zhou who is also the president of Progressive Teachers Union (PTUZ) said C-mine is a former thriving gold mine that closed in the 1990s when the owners abandoned workers without paying any terminal benefits. He said:

Former workers, therefore, continued to live in mine compound houses and scavenge for survival. However, a new C-mine investor who has been engaged in a wrangle with former C-mine workers for the past two years brought bulldozers to destroy the former mine workers’ houses and shops in a manner reminiscent of the brutal Rhodesian Front’s destruction of Tangwena homesteads in Gairezi area in the 1970s.

Zhou claimed the new miner was equipped with a court order and was also accompanied by police officers. He added that the occupants were caught unawares and lost their houses and property.

He said investment must respect the existing laws in terms of relocation of population and compensation rather than reverting to the colonial Master and Servant Act, unfettered thuggery and brutality.

He called upon the government to intervene and protect the former mineworkers who apart from failing to receive their terminal benefits are “under siege from the new investor with tacit approval from the government.” He added:

If the government of Zimbabwe cannot protect citizens, the people of Mberengwa must emulate Rekai Tangwena’s resistance to dislocation, let alone the recent resistance of Uzumba Marambapfungwe. Those former workers of C-mine with no access to government ear, must not be treated as if they are of no account.

Zhou added that the vandalism has greatly affected students who are currently writing Grade 7, ‘O’ and ‘A’ level examinations as they have been left without shelter and their reading material has also been destroyed in their houses.