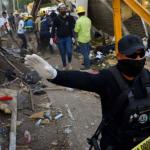 At least 53 mostly Central Americans were killed on Thursday when the truck they were in flipped over in southern Mexico, in one of the worst accidents to befall migrants risking their lives to reach the United States.

The trailer broke open and spilt out migrants when the truck crashed on a sharp curve outside the city of Tuxtla Gutierrez in the state of Chiapas, according to video footage of the aftermath and civil protection authorities.

The Attorney General’s office put the death toll at 53.

A shocked-looking Guatemalan man sitting at the scene in footage broadcast on social media said:

It took a bend, and because of the weight of us people inside, we all went with it.

The trailer couldn’t handle the weight of people.

Several dozen people were injured and taken to hospitals in Chiapas, which borders Guatemala. Authorities say more than 100 people were travelling inside the trailer.

Reuters images showed a white trailer on its side on a highway, and rows of what appeared to be bodies of victims wrapped in white cloth.

A video of the scene streamed on social media showed a woman holding a child wailing in her lap, both covered in blood. Another video showed a man curled up in pain inside the destroyed trailer, hardly moving as helpers pulled out bodies.

Men, women and children were among the dead, the Chiapas state government said, and President Andres Manuel Lopez Obrador on Twitter expressed his sorrow at the “very painful” incident.

Governments should solve economic problems to avoid people running away from poverty and dying like this.Rip.

They were going for greener pastures. What an you do when it has come hard in your country. May their souls rest in peace