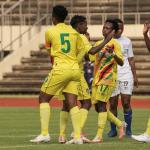 The Mighty Warriors secured a 3-1 win over Eswatini (formerly Swaziland) in an African Women Cup of Nations qualifier played at the National Sports Stadium on Wednesday.

Merjury Nyaumwe, Privilege Mupeti and Emmaculate Msipa scored for the home side while Eswatini got their consolation from Lesego Mokgale with all the four goals coming in the first half.

Mighty Warriors coach Sithethelelwe Sibanda was impressed with the overall performance of her charges but pointed out areas that need improvement. She said:

Of course, I am disappointed with how we conceded but I am confident we will carry ourselves through the line.

We played very well, our ball circulation was up there and we could have won with a bigger margin still.

But, I think we don’t have to worry much, we have the advantage and we will implement some good strategies going into the next match.

Her Eswatini counterpart Dumisani Makhanya expressed confidence that his team can still overturn the deficit. He said:

Congratulations to Zimbabwe for winning the first leg. They played so well but we remain positive ahead of the return leg.

Obviously, it’s not going to be any easier but look, we showed some good signs in this match and we can do better at home.