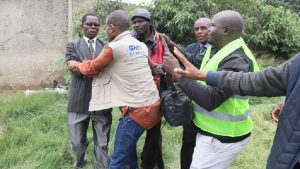 The Zimbabwe Electoral Commission (ZEC) has formed a committee to monitor local media, a move that observers said was equivalent to a clampdown on journalists covering electoral processes.

Zimbabwe will hold by-elections on March 26, while general elections are expected next year.

Addressing a press briefing on Monday, ZEC spokesperson Joyce Kazembe announced that the electoral body had activated a media monitoring committee, and would soon set up a “monitoring team” to ensure that the media adheres to its regulations.

Kazembe said the committee would comprise members of the Zimbabwe Media Commission (ZMC) and the Broadcasting Authority of Zimbabwe (BAZ), and would be chaired by ZEC. Kazembe said:

The Zimbabwe Electoral Commission is responsible for monitoring the media during election periods in terms of section 160 of the Electoral Act and Statutory Instrument (SI) 33 of 2008.

This task is executed in collaboration with the Zimbabwe Media Commission (ZMC) for print media and the Broadcasting Authority of Zimbabwe for the electronic media. The law compels the commission to attach a report on media monitoring to all election reports submitted to Parliament. In compliance with the above provisions of the law, the commission has activated the media monitoring committee to monitor the coverage of the upcoming by-elections.

The commission appealed to the media and political players to also adhere to the media regulations, SI 33 of 2008 in the coverage of by-elections.

Media lawyer Chris Mhike said ZEC’s move constituted over-regulation of media practitioners, adding that it could infringe on the freedom of journalists to gather and disseminate information. Mhike told NewsDay:

For a long time now, scores of media practitioners, and various Press freedom advocates have complained that the media in Zimbabwe is over-regulated. The most recent announcement by ZEC regarding the appointment of a media monitoring committee, is yet another clear confirmation that our electoral law is inimical to media freedom, and should, therefore, be amended, as a matter of urgency… There is no good reason for the State to transfer these ZMC roles to Zec during electoral seasons.

Voluntary Media Council of Zimbabwe (VMCZ) executive director Loughty Dube said while ZEC is allowed by law to regulate the media on electoral processes, the committee should be inclusive of media stakeholders to promote transparency and credibility. Dube added:

When it only constitutes State media bodies, it raises questions on the body’s credibility and transparency issues.

Media Institute of Southern Africa (MISA) Zimbabwe chairperson Golden Maunganidze said the committee should work towards addressing the concerns of journalists to promote an environment conducive for their operations.

Maunganidze added that the demand for another accreditation fee by ZEC will limit the participation of journalists as some will not afford the fees.

He also bemoaned the harassment of journalists while covering elections when they do not have valid accreditation cards.