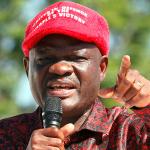 The MDC-T led by Douglas Mwonzora is preparing for the ordinary congress set for the end of this year, the party’s chairman Morgen Komichi has said.

Speaking in an interview on OpenParly Twitter Grill, where he was asked when the party was going to hold the ordinary congress, Komichi said they were working on it. Komichi said:

We are preparing for the ordinary congress right now and it is going to be held by end of this year.

Mwonzora became the party’s president after he outclassed his rivals during an extraordinary congress held on 27 December last year that had been ordered by the court.

According to the court, the person to take over was supposed to complete the term of the late Morgan Tsvangirai.

The court also ordered that the person was to be elected using the 2014 party structures.

Although Mwonzora emerged as the winner, other contestants such as Thokozani Khupe are on record saying the congress was rigged.

According to Komichi, the extraordinary congress was important although the quality of the congress was questionable.

He said they have since decided to let bygones be bygones and are now focused on moving the party forward.