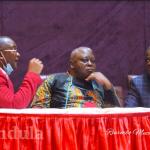 Opposition MDC-T led by Douglas Mwonzora has failed to find candidates to represent it in the March 26 council by-elections in various parts of Matabeleland and Midlands.

According to documents seen by Harare Open Council, the party has multiple areas which have absolutely no candidate to represent them.

The party has also failed to get candidates for Mbizo Ward 12, Zibagwe Ward 8, Gokwe North Ward 23 and Mberengwa West for Ward 25 and 34.

Takawira Ward 3 and Guruve Ward 7 in Mash Central also have no candidates for the party.

Other provinces in which the party has failed to get candidates include Zvimba, Chegutu and Mhondoro Mubaira in Mash West.

Mwonzora has also not fared well in Manicaland failing to get candidates for Makoni Ward 4, Mutare Ward 9 and Ward 17.

The party has however received numerous applications from candidates intending to contest in parts of Harare and Marondera.

Mwonzora has previously been accused of seeking to have the elections scrapped in a clandestine meeting with President Emmerson Mnangagwa.

According to reports, the former MDC Secretary-General is in favour of a Government of National Unity (GNU).

Masports atanga ,pupert you don't. get one vote ,even yr self yu forget voting fr yrself

I HAVE ALWAYS TOLD CAMARADA MWONZORA THAT HE DUG HIS POLITICAL GRAVE ON THE DAY HE HE RIVALED NELSON CHAMISA.

NOW LOOK, HE IS FAILING TO GET CANDIDATES FOR COUNCILLORS IN MOST WARDS.

HE THINKS PEOPLE ARE SILLY. PEOPLE ARE CLEVER. HE GOES TO STATE HOUSE TO PERSUADE PRESIDENT ED MNANGAGWA TO SCRAPE BYELECTIONS AND HARMONISED ELECTIONS AND SUBSTITUTE THEM WITH A GOVERNMENT OF NATIONAL UNITY {GNU}.

HE HAS REFUSED TO LISTEN AND ACCEPT NONSENSE. BYELECTIONS WILL GO AHEAD AND HARMONISED ELECTIONS SHALL PROCEED AS PLANED TOO IN 2023.

I AM TOLD THAT MDC ALLIANCE IS OVERWHELMED WITH CANDIDATES. IT IS FAILING TO CHOOSE THE RIGHT CANDIDATES.