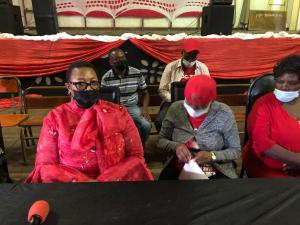 Khupe’s expulsion from the party comes after she announced a split of the MDC-T during a press conference in Bulawayo last week on Friday.

She also claimed that MDC-T leader Douglas Mwonzora had left the party after he announced that the opposition party will contest the 26 March by-elections as the MDC Alliance.

In a statement this Saturday, MDC-T Secretary Information and Publicity Witness Dube said Khupe and her colleagues won’t be allowed to use the MDC-T name and symbols. Said, Dube:

The National Council also deliberated on Dr Thokozani Khupe’s alleged “Declaration of a Split” and noted that no such arrangement was catered for by the Party Constitution and at law in general.

The Council asserted the move by Dr Khupe as a testament to her having terminated her own membership with the party.

Accordingly, the National Council unanimously resolved to expel her, together with Nomvula Mguni, Mildred Dube and Ntandoyenkosi Ndhlovu with immediate effect.

Dr Khupe, together with the aforementioned trio, will therefore not be allowed to use the MDC-T name, symbols, and or associated intellectual property henceforth.

If Doctor Khupe tries to contest for a parliamentary seat with another party or as an independent, Mwonzora will claim that she is still a member of MDCT. Mirayi muwone henyu.