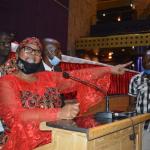 The Douglas Mwonzora-led MDC-T has denied claims that it is planning to recall its vice president Thokozani Khupe from Parliament.

This follows reports indicating that the fractured opposition party held a national council meeting on 26 November where it was resolved to recall Khupe and eventually sack her from the party.

Khupe accuses the MDC-T of being tribalistic and has demanded that the party come out clean on attempts to fire her.

Through her lawyers Ncube Attorneys, Khupe wrote a letter to party secretary-general Paurina Mupariwa on Friday in which she alleged the party held a national council meeting on 26 November where the plot to recall her was hatched.

Khupe snubbed a recent meeting of the party’s shadow cabinet and has been avoiding some of the party programmes.

At the last national council meeting we had, Khupe was in attendance and she was the first to even contribute as she was saying we should delay holding our congress.

She told us that the party needed more time to prepare for our congress but we felt that we have to do it as a matter of urgency.

So, it will be interesting to see the letter in which she alleges these things.

The factionalism which emerged at the chaotic MDC-T extraordinary congress held on 27 December 2020 has followed the party since, with the rifts seemingly widening.