MDC: Chamisa Is The Only Solution To Zimbabwe's Isolation, ZANU PF Knows 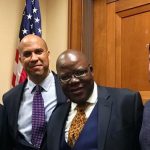 Opposition MDC Alliance official Ostalloz Siziba has claimed that even the ruling ZANU PF knows that opposition leader, Nelson Chamisa is the only person who can remove Zimbabwe from international isolation.

Siziba who is MDC Alliance’s deputy national spokesperson Ostalloz Siziba told NewZimbabwe.com in an interview that ZANU PF uses its supporters to pass the message to Chamisa. He said:

Ironically when Zanu-PF funds its people and thugs to carry placards and ask Nelson Chamisa to help them end Zimbabwe’s international isolation, they recognize his legitimacy and capacity to resolve these issues and they are very correct.

For the first time I have seen Zanu-PF articulating in their own protests a clear message, it acknowledges that Chamisa is the only one who can give them jobs, end international isolation, yes give him the responsibility to govern and he will have multilateral and bilateral conversations with the international community.

He said Zimbabwe is isolated from the international community because of violence and terror, corruption and extraction of economic-political order, legitimacy questions associated with the ZANU PF government led by President Emmerson Mnangagwa.

He said once the MDC Alliance comes to power, it will “make a clear program of re-engagement which is born out of the domestic resolution of our own problems so that we get to the community of nations.”

I am very sure kuti ndlumbi uyo mu foreigner saka anonyengerera pekugara but he must come down when commenting bcoz there shall come a time deal with perpetrators like him ,, to tell the truth MDCA through H E The president of Zimbabwe Nelson Chamisa is the solution of the messes coursed by these uneducated ,thugs, culprits ,feret, vampires zanu pf kwashioked miniatures, ka Mugabe kai condema G nU kachishoropodza vanaBiti izvo kaida kuba takazonzwa koti kwashaikwa US$ 15 billion ,

US$0 Harare
Mr ndhlumbi 6 months ago

That is also the problem of MDC. Its using sanctions 2 get votes, therefore its 100% blackmailing poor Zimbabweans. This means that it doesnt have the interest of local people @ heart. It has the interests of the western people that is why it was formed. Zanu PF is a good Pan African nationalistic party but factionalism & massive corruption is killing it slowly. Mayb a new party with a different manifesto can b better

Report Abuse
Man of the moment 6 months ago