MDC Alliance Stands In Solidarity With The People Of eSwatini 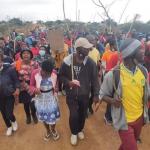 WE STAND IN SOLIDARITY WITH THE PEOPLE OF ESWATINI

In line with our pan-African Global Agenda, we continue to express solidarity with the people of eSwatini in their just and legitimate demand for political transformation and democracy.

Over the past two weeks, 28 AmaSwati have been killed in cold blood. Many others have been injured following the deployment of the army in civilian locations. Live ammunition has been used against pro-democracy protestors. Schools were indefinitely closed and the internet was shutdown.

We unreservedly condemn these gross human rights violations that are being meted out against defenceless citizens and protestors. We call upon the Government of eSwatini to respect fundamental freedoms in line with domestic, regional and international law, norms and practises.

We reiterate the five key demands of the eSwatini pro-democracy movement, in particular, the urgent need for:

2. The unbanning of political parties,

4. A new democratic Constitution and

5. A multi-party dispensation anchored on free, fair and credible elections.

We commend the Chairperson of SADC Organ on Politics, Defence and Security Cooperation H.E. Matamela Cyril Ramaphosa for dispatching envoys to eSwatini led by Hon. Jeff Radebe and for meeting all relevant stakeholders including pro-democracy forces. We take note of the SADC statement following the visit and in particular the call for national dialogue. We however echo pro-democracy voices that Sibaya cannot be a credible and meaningful platform for genuine dialogue. We, therefore, urge SADC to take urgent decisive steps in facilitating a credible and genuine national dialogue process in eSwatini.

We further call upon SADC to dispatch a peacekeeping mission to eSwatini in order to protect citizens against further human rights violations.