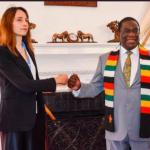 Opposition MDC Alliance has accused written to the United Nations for an investigation into special rapporteur Alena Douhan’s “unprofessional conduct and bias” after she released a preliminary report on her findings on the impact of sanctions on Zimbabwe.

MDC Alliance The party described the report as pre-determined as it did not capture the opposition’s views.

The opposition party’s vice-president Tendai Biti said Friday told journalists that it had petitioned the UN. He said:

We have written a formal compliant to New York to the UN on the conduct of Miss Douhan, her omissions and commissions and we hope that the UN will formally carry out an investigation to validate our complains.

We hope that they will acknowledge our complaint. We believe that we are an important stakeholder.

We are the biggest opposition political party in the country. If you look at her programme which was made public, it was dominated by public authorities as if she came with a mindset of doing a one-sided subjective consultation with government.

The MDC Alliance on Wednesday complained that Douhan released a statement on her preliminary findings while she was still locked in a meeting with the opposition party, meaning their views were not captured in the report. Biti said:

We have asked the UN to verify with her who funded her trip to Zimbabwe and verify with her personal accounts the source of deposits and credits in her account in the last few weeks.

MDC Alliance accuses Douhan of plagiarising her previous reports to Venezuela and Syria and pasting them on her report on Zimbabwe.

Biti added that he is convinced that Douhan wrote her statement before she came to Zimbabwe adding “It is completely unprofessional and unacceptable.”

We don't need sanctions to remove ZPF from office.We need registered voters doing their duty .If sanctions don't hurt ,was the west foolish to have them?ZPF stop your corruption.You and MDC Alliance should relook yourselves in the mirror you cost the ordinary man in the street , the majority untold suffering.You two parties you no longer serve Zimbabweans

Biti is being foolish here...so he z accusing her of being funded and bribed by Zanu-p??
Biti is already fighting where there is no need to...he shld challenge in a polite way

Venezuela opposition once accused chihure icho hachina dhiri icho ,,,the only thing that we have to do is kana tikanzwa kuti member yedu yarohwa let we go in multiple and atack all the perpetrators thouroghly

Taura hako , Biti is possessed by a power demon... And he is playing his cards well

This was an unfair practice, you know i thought she was going to be transparent with her investigationa but kana zvakudai manje hazvicharatidze a good picture, this practice shows some kind of favour at the expense of other opposition parties.