Mberengwa Miners Up For Murdering 'Intruder' 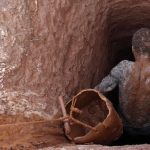 The Zimbabwe Republic Police has arrested three Mberengwa miners over the murder of Muneinashe Mangena who had teamed up with his colleagues to conduct illegal mining activities at the accused’s mine.

Police say the mine is unregistered. Pindula News presents a police statement on the case.

Police confirms the arrest of Oswell Zhou (41), Anengoni Zhou (29), Muchineripi Masarira (43) and Wilson Kuchivirika (32) in connection with the murder of Muneinashe Mangena (19) in Mberengwa on 16/11/21.

The victim teamed up with Jemson Macheza (21) and Josalam Zhou Museva (20) to undertake some illegal mining activities at an unregistered gold mine belonging to the suspects.

The quartet attacked the victim and struck him with an axe on the head before he fell into a shaft and died. Josalam Zhou Museva managed to escape while Jemson Mucheza was assaulted with logs all over the body. Investigations are underway.

Violence is prevalent in the mining sector, especially amongst artisanal (makorokoza) and small scale miners.

In recent years, the mining sector was faced with machete-wielding gangs who terrorised miners and the general populace particularly in gold mining towns dotted across the country.