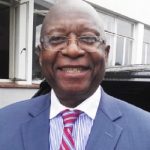 NewZimbabwe.com reported ZANU PF sources as saying Mavima sought an emergency meeting with Mnangagwa intending to resign from the chairmanship after an aborted Provincial Coordinating Committee (PCC) meeting in Gweru the day before.

Ncube had also bussed machete-wielding thugs to surround the venue of the meeting to intimidate his opponents.

During the meeting with Mnangagwa, Mavima (Larry), reportedly said he could not work with Mudha because of his violent tendencies.

Mavima is reported to have told Mnangagwa that numerous provincial leaders were considering leaving the party because of Ncube’s conduct. Said a ZANU PF insider:

What happened is that after the Saturday fiasco at the PCC meeting, some senior ZANU PF members advised Mavhima to go straight to the president and give him a full report of what transpired.

And so on Sunday, he went to the president’s farm and they spent about three hours conversing about the issues.

The message he carried to the president was simple and clear: nobody was able to work with Mudha anymore.

So it was a question of either to retain Mudha and risk dismantling the province or sack him and save the situation. Any leader in that situation would decide the way that ED did.

You should visit the province and see how excited people are about this development.

In fact, this axe had been hanging over his head since last year when he started deploying some CIO (Central Intelligence Organisation) operatives and machete gangs to harass his rivals in a bid to win the provincial chairmanship position which he wanted.

So basically, the man had the rug proverbially pulled off his feet and when the province decided that Mavhima should be the unopposed chairman, he resorted to fighting for his proxies who were seeking other positions through violence and intimidation.

The situation had become very tricky and the President really faced the inevitable choice of having to fire him.

But he was not working alone. He was working in direct consultation with July Moyo, who leads a faction in the province that wants to dominate affairs here.

It will not, therefore, be surprising to see the axe falling on him because he is basically the master controller and these are his runners.

Ncube was fired from the Government on Monday for “conduct that was deemed inappropriate for a Minister of Government”.

WHAT IS HAPPENING IN THIS CASE IS THAT PEOPLE ARE ONLY HEARING ONE SIDE OF THE STORY. THE FIRST ACCUSATION WE HEARD WAS THAT HE WAS DISMISSED BECAUSE OF BEHAVIOUR INCOMPATIBLE WITH A MINISTER OF GOVERNMENT.

NEXT WE WERE TOLD THAT HE WAS FIRED FOR ORGANIZING A MARAUDING MACHETE GANG WHICH DISTURBED THE PROVINCIAL COORDINATING COMMITTEE MEETING.

TODAY WE HEAR THAT CAMARADA LARRY MAVHIMA ACTED AS A CATALYST BY THREATENING PRESIDENT ED MNANGAGWA WITH RESIGNATION FROM HIS NEWLY ACQUIRED POSITION OF THE MIDLANDS PROVINCIAL CHAIRMAN.

I AM TOLD THAT JOURNALISTS, WORLDWIDE, ARE TRAINED TO BALANCE STORIES. WHY ARE THEY NOT BALANCING THIS STORY FOR US ? PEOPLE ARE WAITING TO HEAR THE OTHER SIDE OF THE COIN.

JOURNALISTS, APPROACH CAMARADA NCUBE AND GET HIS SIDE OF THE STORY ALTHOUGH WE HAVE READ THAT HE IS AN ADVOCATE OF VIOLENCE. THIS TIME MUDHA WOULD NOT HARM EVEN A FLY BECAUSE HE IS STRATEGIZING HIS FUTURE IN ZANU PF OR OUTSIDE ZANU PF.

{ EVERY BEGINNING HAS AN ENDING }

@Madala Banda: Are you saying Lady or Larry