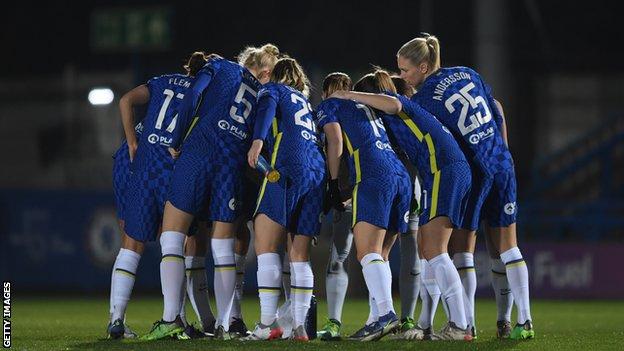 Players in the top two tiers of women's football in England will receive improved maternity pay as part of a new agreement.

From next season clubs in the Women's Super League and Championship will pay full wages for the first 14 weeks of maternity leave and then statutory pay.

The current minimum is for clubs to pay statutory maternity salary.

Clubs must meet the requirements as part of their license agreement with the Football Association.

There are also updated terms for injury and illness and termination of contract for long-term injury - which will apply to new deals or if clubs agree to improve contracts early - while the maternity agreement will automatically apply to all players from next season.

Previously, players received six months' pay if an injury occurred but they will now get their basic wage for the first 18 months, then one half of it for the total length of the injury.

Clubs also previously had the right to serve a player notice of three months if they had to end a contract as a result of an injury or illness that has kept them out for 18 months. This has been increased to 12 months.

The FA and PFA announced last week they had reached an agreement to include maternity and long-term sickness cover for the first time.

The FA's director of the Women's Professional Game Kelly Simmons said: "I am delighted we have been able to put this agreement in place and it is another significant step forward for the women's game.

"Player welfare and wellbeing has always been our number one priority and this new policy ensures players are better supported, whether that's going on maternity leave or as a result of a long-term injury."

The National Women's Soccer League Players Association in the United States has reached the first collective bargaining agreement in the history of the league.

The key measures agreed include a 160% increase in the minimum salary to $35,000 (£25,925) a year, up to six months paid mental health leave and eight weeks paid parental leave.

Great improvement on the ladies game