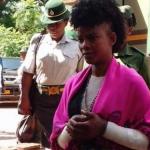 Lawyers representing Marry Mubaiwa-Chiwenga have approached the High Court seeking a review of the trial court proceedings that led to her being remanded in custody for 10 days at the Harare Remand Prison.

Mubaiwa who is facing several criminal charges appeared in court on Wednesday on charges of contravening the Marriage Act after she allegedly lied that Vice President Constantino Chiwenga had consented to legally marry her during the time he was ill and made extensive arrangements for the ceremony.

The trial could not proceed after Mubaiwa’s legal counsel told the court that she was not fit for trial.

She was put in custody pending medical examinations by two Government doctors to ascertain if she is fit to stand trial.

Her lawyers led by Ms Beatrice Mtetwa on Wednesday filed two applications at the High Court, one for review and the other seeking to have the review application heard on an urgent basis.

The lawyers want the court to quash the proceedings in the court of lower rank claiming that the trial magistrate Mr Lazini Ncube committed a gross irregularity in that he failed to make a determination on the application that was before him. Read the court papers:

The respondent (Mr Ncube) committed a gross irregularity by making determination based on section of the Mental Health Act without affording the applicant (Mubaiwa) an opportunity to be heard on the applicability of that section to the matter that was before the court a quo.

The respondent committed a gross irregularity in that he disregarded the evidence that was placed before him and the court orders together with the reports that were prepared in terms of those court orders.

They also argued that Ncube made a questionable decision of placing Mubaiwa in custody considering that the former model had already been examined by three governments doctors.