Marry Chiwenga Bought Rings Worth US$15 000 For Wedding 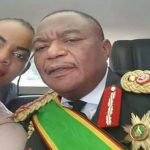 The estranged wife of Vice President Constantino Chiwenga, Marry Mubaiwa-Chiwenga, ordered a jeweller to make US$15 000 worth of wedding rings during her preparation for the wedding she allegedly lied that the Vice President had consented to.

This came out in court on Tuesday where Marry was being tried in a case where she is alleged to have misrepresented that the VP had consented to a wedding with her at a time he was hospitalised in India sometime in June 2019.

Colonel Gesham Muradzi, who was employed as an administrator in the Vice President’s Office during that time, Tuesday told the court that Marry called and asked him to pay US$15 000 to a jeweller located at Newlands Shopping Centre in Harare for the rings. Testifying, Muradzi said:

In 2019 they were in India when Honourable General CGD Chiwenga was not feeling well. She called me asking how much money I had in the office.

I told her that I had US$23 000, which was left in my custody by Vice President Chiwenga. The money was for looking at affairs at his farm and his children during the time he would be away.

She then asked me to take $15 000 and give brother Mike. She indicated that brother Mike from Alpha Jewellery will call me. I later phoned him to collect the money from the office.

Col Muradzi said he had not spoken to VP Chiwenga as he was hospitalised.

A jeweller, who also testified in the matter, told the court that he was given an order to make wedding rings at his company sometime in June 2019.

Victoria Falls magistrate Miss Linda Dzvene, who was the then personal assistant to former Chief Magistrate Justice Munamato Mutevedzi, also testified and confirmed that she was the one who completed the marriage licence book upon instructions from her boss.