Marry Chiwenga Appeals To United Nations To 'Save' Her Children 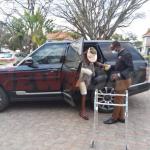 Marry Chiwenga says his estranged husband, Vice President Constantino Chiwenga should not be allowed to visit any with their children without her consent.

Marry and VP Chiwenga recently appeared in court in a case in which the latter accuses his wife of attempting to fraudulently acquire a marriage certificate at a time when he was hospitalised at a South African hospital.

VP Chiwenga is also seeking to divorce his wife and has taken custody of their three minor children.

Posting on Twitter, Marry appealed to the United Nations Human Rights Council (UNHRC) to intervene on her behalf to ensure that her children are safe. She wrote:

I am so heartbroken by the attitude that my husband Vice President Chiwenga is presenting, the “I don’t care because I am above the law and even the President ED cannot do anything to me”. I want my children and no country in the world should accept him in their country.

I am continuing my tweet that my children should not leave the country without my consent. This is abuse and that is why he is laying false allegations against me so that I don’t see my children. Our airport and immigration must not allow him to exit this country.

My children are being looked after by maids, one of the maids is the one he is using to lay false allegations that I assaulted her, she said she is in a relationship with him, l don’t care, I want my children. UNHRC should look at this seriously

UNHRC should not allow VP Chiwenga into any country until he gives me my children. I don’t know if they are still alive or if they are not being abused as he has no time for them. They are below 10years, International Criminal Court must take a look at this and assist.

Allowing Constantino Chiwenga into any country with my children is accepting human trafficking as they are young children. Are my children still there? I wonder. He is breaking the laws that they put in place and breaking them…

Achamama chete. Akajaidzwa big time. Millions of children are starving to death everyday. UN won't do shit. I love it when this happens to her. There is no happy ending

UUUMMM, IS UNHRC GOING TO HELP HERE WHERE THE VICE PRESIDENT CHIWENGA WAS GRANTED CUSTODY OF THE CHILDREN BY COURT ?

FOR THOSE WHO DID NOT FOLLOW THIS STORY, WHAT HAPPENED IS THAT VICE PRESIDENT CONSTANTINO GUVHEYA CHIWENGA APPROACHED THE COURTS CLAIMING CUSTODY OF THE COUPLE'S 3 CHILDREN ON THE GROUND THAT HIS WIFE MARRY MUBAIWA CHIWENGA WAS UNFIT TO KEEP CUSTODY OF THE CHILDREN BECAUSE SHE ABUSED DRUGS.

NOW SHE HAS GONE A GEAR UP. SHE HAS ASKED UNHRC TO INTERVENE ON HER BEHALF AND BAR HER ESTRANGED HUSBAND TO TAKE CHILDREN OUT OF THIS COUNTRY. SHE SAYS VP CHIWENGA IS HUMAN TRAFFICKING HER CHILDREN WHO ARE UNDER THE AGE OF 10 YEARS.

I DO NOT SEE HOW THIS WORLD ORGANISATION IS GOING TO HELP HER. I URGE HER TO APPEAL AGAINST THE JUDGEMENT WHICH GAVE CUSTODY TO HER ESTRANGED HUSBAND.

SHE HAS ONE OF THE COUNTRY'S BEST HUMAN RIGHTS LAWYERS IN THE MOULD OF BEATRICE MTETWA. MRS CHIWENGA MUST EXPLOIT HER EXPERTISE.

She won't a court case but the best is to ask for forgiveness & she has to first forgive herself for the past doing. Thank yu bush lawyer tiri kuverenga your comments

She is now tasting her own medicine. Let her swallow her pride and ask for forgiveness starting from Shingi and to the Vice President. Hondo yaari kurwa haihwinike.

Marry is this work or ?