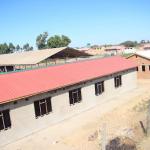 Eleven (11) inmates from the Marondera Female Open Prison have been granted special leave to enjoy Christmas with their families.

The inmates will join their families until 28 December, with the second batch of 10 going on leave from 29 December to 4 January.

The Marondera female open prison was officially opened in June this year and has 21 inmates.

An inmate, Moreblessing Nyamutata, expressed excitement following her temporary release from prison, saying “I am happy that I will be with my family during the holidays”.

Another inmate, Runaida Manyan’anya was also happy to be joining her family for Christmas. She said:

It is a happy moment to be with my family for the first time in 3 years.

The Zimbabwe Prisons and Correctional Services (ZPCS) Officer in Charge at Marondera Female Open Prison Jubilee Madenga said the programme will help the inmate in the rehabilitation process.

Why aren't male prisoners from Open Prisons getting the same treatment?

It should be made known to the general public which prisoners are granted these special leaves because i cant enjoy my christmas freely knowing that the murderer who killed my friend, uncle, cousin or sister is in the proximity before her rehabilitation period has expired and blood is still dripping on her hands.

Uri dofo iwe! Prisoners getting released are from an Open Prison and Open Prisons only house convicts who committed non-violent crime in fact they are those who committed level 1 offences otherwise known as misdemeanors which are non-violent in mature and carry a light sentence. Murderers, rapists, robbers and the likes will never be housed at an open prison rather they'll be at a maximum security prison and in the level 4 section which houses the toughest criminals on the land.

All prisoners should be treated the same, they are in prison for a reason.