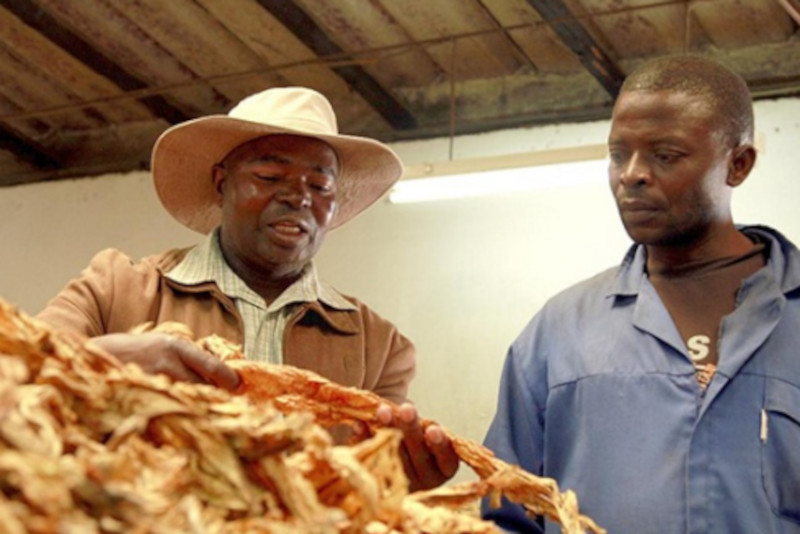 Picture: The now late Stanley Masaiti with one of his farm workers around 2014

Update: An earlier version of this report claimed that Stanely Masaiti had also shot his brother. New information we have suggests that he did not actually shoo his brother. We apologise for the inaccurate information.

A Marondera businessman called Stanley Masaiti reportedly shot himself in the head following a dispute with his brother over $4m.

A note was recovered at the scene which read:

Mudzose mari yangu yamakaba usd 4 million. [translated: Bring back my money that you stole US $4 million ]

I have learnt with a heavy heart that we have lost Mr Stanley Masaiti today. Mr Masaiti was a prominent farmer well-known here in Marondera.

It has been confirmed to me that Mr Masaiti shot himself this morning at around 6.30am at Chipiwa Gardens; his body was finally collected this evening to a local Hospital.

My thoughts and prayers this evening are with the Masaiti family. May God comfort you in this very difficult time

Rest in Peace Save

Masaiti, a millionaire farmer, was one of the most successful businesspeople in Marondera. Stanley Masaiti was a farm manager before he got Muembwe Farm from the previous owner he worked for, a white farmer, during the land invasions. The white farmer struck a deal with the authorities to peacefully transfer the ownership of the 120-hectare Muembwe Farm to Masaiti.

The dispute between the two brothers stems back to a forensic audit that Stanley at his, Muembwe Tobacco Farm, after which he discovered the brother, Daniel, had been stealing from him.

He subsequently took the brother to the court around 2019 in a bid to recover the money.

A news report written around the time of the case reads:

A TOBACCO farmer has dragged his brother and business partner to the High Court for allegedly stealing US$3 million from his sales account with Tian Ze Zimbabwe.

In summons filed at the High Court, Stanely Masaiti listed his brother Daniel Masaiti and his company Danchip Enterprises as respondents.

The plaintiff’s (Stanely) claim arose from the unsanctioned withdrawal and diversion of funds from his tobacco sales account with Tian Ze into the defendant’s CBZ bank accounts between 2009 and 2016 amounting to US$3 179 851, 32.

The nature of the claim is that in 2002 Stanely was allocated plot 1-3 of Currithvale Farm and in 2004 the land committee recommended that he be allocated Membwe Farm.

At that time, Stanely was running his farming business and invited Daniel, a former teacher and brother, to come and assist him with bookkeeping issues, payment of workers and payment of service providers.

The arrangement was that Stanely would assist Daniel to get medical attention, who at that time was suffering from a leg problem.

“For all intents and purposes the first defendant was working for the plaintiff and as his young brother, plaintiff would compensate him by buying him assets and gave him
$80 000 for construction of his Marondera home, $40 000 to boost stocks in his business and $50 000 to buy a building for Chikaidos,” read the summons.
Stanely specifically purchased a Toyota Fortuner, Isuzu truck and Range Rover sport.

Stanely had authorised his brother to use his MBCA bank account for his farming business and had entered contracts with Tian Ze and also government’s Command Agriculture programme.

According to the summons, in 2018 Stanely discovered through a forensic audit that substantial amounts were diverted from his tobacco sales account with Tian Ze into Daniel’s CBZ bank accounts.

There was allegedly no basis for Daniel and his company to engage in such transactions which were prejudicial to Stanely.

You fools thts my uncle. He used to smoke Ganja and Zol besides thts none of your biz

Maybe the late used juju to accumulate his wealth. Which stopped him from brushing teeth🤔🤔

The late dd nt want to waste money on useless things like you Al Shabab. Thinking about Super, Ranger and Skokiyana

Reply Report Abuse
I captured it 1 month ago

Thts the result of riches from witchcraft.

The love of money is the root of all evil.

The late Stanley was actually employed by Daniel as his farm manager.He could come to Tian Ze accompanying the blue Freightliner truck carrying Daniel's tobacco bales.The tradename on the truck is DanChip Enterprises carrying tobacco of Pakuru Logistics.Then Daniel would later come to the floors driving the Range Rover Sport,using a hand clutch on the other side.It is not making sense to me for Daniel who had always been a farm manager would hire his brother who had no farm managing background to be his farm manager when Daniel was just a teacher

Reply Report Abuse
You 1 month ago

can't see any of my comments