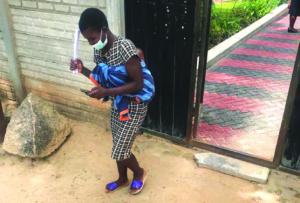 A Johane Marange Apostolic Church polygamist shocked the Mutare Magistrates Court recently when he disclosed that he divorced one of his wives for refusing to provide for him financially.

Fungai Marange (36) of Marange was dragged before Mutare magistrate, Xavier Chipato, by his estranged wife Molline Mufudza who was applying for $15 000 maintenance for the upkeep of her four children who are all below the age of five.

Marange accused Mufudza of applying for maintenance as a way of fixing him after he sent her packing when the couple appeared in court last week on Thursday.

He told the court that according to his religious doctrine, his three wives must support him and their eight children as he is the head of the family. Said Marange:

Mufudza is stubborn. She knows that I am uneducated and therefore cannot be employed anywhere, but she insists that I should take care of her.

She became wayward when she realised that I could not secure a job. She started putting on short dresses like the one she is wearing today. It is totally unacceptable in our church.

She even stopped attending church services. Look at her, she does not even have a headscarf on her head.

Marange said the $15 000 that Mufudza was asking for was too much, and offered to pay US$15 every month for the four children’s upkeep.

Mufudza told the court that Marange is a builder, but he denied the claim, saying he was his late brother’s assistant.

Chipato ordered Marange to pay US$15 monthly maintenance for his four minor children.

@Nimrod & @Bright = peace unto you all

below are the basic priniples of Johane Marange Apostolic Church members
1- No marriage of Under Age girls permitted since time immemorial
2- No marrying and Divorcing willy nilly _ think before you do. You TOUCH you MOVE
3- IF you marry 700 wives, make sure you provide for them all including CHILDREN
4- We preach peace & love throught and across all people of different divides

now hapana musha usina benzi in the same sense as what we see in the communities we all live in kuti vana vedu vashata ava veduwee and that can not be missed even in the church.
Nharadada hadzi peri kwese kwese

Hoo it was reported by Manica post...only e date is correct. ..

""He told the court that according to his religious doctrine, his three wives must support him and their eight children as he is the head of the family.""

4 children who are all below the age of 5???? Guys can someone help me here.. Kkkkk ndatadza kunzwisisa Police in Manicaland have appealed to members of the public with information leading to the whereabouts of a missing toddler to contact their neare.. CCC councillors in Masvingo Urban have demanded that Masvingo City Council management should consult them first before approving donations from cit.. Woman Shot By Police In Chitungwiza Sues For Damages

The Zimbabwe Lawyers for Human Rights (ZLHR) has notified the Zimbabwe Republic Police (ZRP) of its intention to sue for damages on behalf of Pamel.. Police officers shot dead four suspected armed robbers during a shootout in Gwanda on Wednesday afternoon. Police confirmed the incident in a post .. Local economic commentators have accused the Government of using the Russian invasion of Ukraine as a scapegoat for its failure to manage the count..

We Need Laptops For All Staff Members, Says Highlanders

Highlanders Football Club says it is seeking donations to buy laptops for its officials in order to comply with FIFA club licensing requirements. I..